How to Tell if College Presidents Are Overpaid 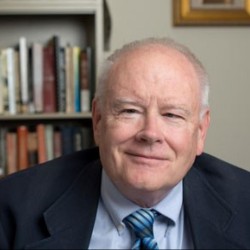 Richard Vedder
Richard K. Vedder is a policiy advisor on economics to The Heartland Institute. He is co-author (with Lowell Gallaway) of The Independent Institute book, Out of Work, the recipient of both the Sir Antony Fisher International Memorial Award and Mencken Award Finalist for Best Book, and the Institute monograph, Can Teachers Own Their Own Schools?

Professor Vedder received his Ph.D. in economics from the University of Illinois, and he has been Senior Economist at the U.S. Joint Economic Committee and Visiting Fellow at the Center for the Study of American Business, Washington University, and he has taught at the University of Colorado, Claremont Men’s College, and MARA Institute of Technology. His other books include Going Broke by Degree: Why College Costs Too Much, The American Economy in Historical Perspective; Poverty, Income Distribution, the Family and Public Policy (with L. Gallaway); Essays in Nineteenth Century Economic History; Essays in the Economy of the Old Northwest; Economic Impact of Government Spending: A Fifty State Analysis, and Variations in Business and Economic History. His hundreds of articles and reviews have appeared in numerous scholarly journals as well as such publications as the Wall Street Journal, Christian Science Monitor, National Review, Washington Times, and Investor’s Business Daily.

The Chronicle of Higher Education tells us the median salary of public university presidents rose 4.7 percent in 2011-12 to more than $440,000 a year. This increase vastly outpaced the rate of inflation, as well as the earnings of the typical worker in the U.S. economy. Perhaps, most relevant for this community, it also surpassed the compensation growth for university professors.

Moreover, the median statistic masks that several presidents earned more than double that amount. Pennsylvania State University’s Graham Spanier, best known for presiding over the worst athletic scandal in collegiate history, topped the list, earning $2,906,721 in total compensation. (He was forced to resign in November 2011 and was indicted in November 2012 on charges related to the Jerry Sandusky sex-abuse scandal.)

Spanier’s package will get the attention. But the outrage should be spread around. University presidents are becoming ever more plutocratic even as the students find it harder and harder to pay for their studies. University leaders claim institutional poverty as they enrich themselves. A perennial leader of the highest-paid list, Gordon Gee of Ohio State University (more than $1.8 million last year), paid $532 for a shower curtain for the presidential mansion.

There appears to be neither rhyme nor reason for vast differences in presidential pay. David R. Hopkins, the president of Wright State University — an unremarkable commuter school ranked rather poorly in major-magazine rankings — makes far more than the presidents of the much larger, and vastly more prestigious, University of California at Berkeley, University of North Carolina at Chapel Hill, or the University of Wisconsin.

The four-year graduation rate at Wright State is 18 percent, whereas at Berkeley it is 71 percent. The president of my college (Ohio University), Roderick McDavis, has seen the school’s US News & World Report ranking fall considerably in his tenure of almost nine years. But he made more in 2011-12 than Berkeley’s Robert J. Birgeneau, who stepped down in 2012 after nine years as chancellor of the school ranked first in the US News list of public universities.

My associate Daniel Garrett analyzed the relationship between presidential compensation and academic performance for 145 schools, using the Forbes magazine rankings of best colleges. (Full disclosure: My Center for College Affordability and Productivity compiles those rankings for Forbes.) Adjusting for enrollment differences, no statistically significant relationship was observed between academic quality and presidential pay.

I informally asked five college-educated friends: What criteria should be used in determining college presidential-salary increases? I got five different answers. One said that those most successful in fundraising should be rewarded the most (the argument often used to justify Gordon Gee’s lavish pay and perks). Another friend stressed the postgraduate performance of students. A third’s answer was that it is all about reputation – – if you improve in the U.S. Newsor Forbes rankings, you should get a nice salary increase. Still another friend stressed retention and graduation rates.

In short, there is no consensus. Among competitive free-enterprise companies, profits, share price and competitor chief-executive-officer pay are considered the metrics upon which compensation decisions should be largely determined. But what is the bottom line in higher education? Did the University of Virginia have a good year in 2012? How would you know?

We know little about some fundamental questions. Are the students at the University of Colorado learning more than those at the University of Kansas? Are they learning more now than five or 10 years ago? These and other schools are either clueless as to the answer, or if somewhat knowledgeable, they typically keep the findings a secret. Public comparison with peer schools is considered bad form by the university presidents I know. Trustees are usually part-time cheerleaders for the institution, not hard-nosed representatives of the public demanding accountability, efficiency and transparency.

University enrollments fell in the closing academic year nationally for the first time in more than a decade. More and more individuals are questioning the value of American higher education as it now exists — the benefits seem to be stagnating, while the costs are rising.

Some new university leaders get this, and believe higher education needs to be leaner, more adaptive to change and include performance-based rewards for achievement. The best example is Mitch Daniels, the president of Purdue University. While still governor of Indiana, Daniels chatted with me about how to devise a presidential contract that tied compensation to achievement of goals. The Purdue board adopted such a system, cutting Daniels’s pay compared with his predecessor’s, yet including provisions allowing the president to earn significant performance bonuses. Daniels has already frozen tuition fees for two years — and also has frozen salaries for most administrators.

Universities are nonprofit institutions that get special privileges, such as government subsidies and tax exemptions, based on the assumption that they are good stewards of the public trust. Big corporations pay their leaders more, but those institutions pay taxes that partially benefit universities. They have a bottom line as well as stockholders and corporate boards that often fire leaders who perform poorly.

University presidents aren’t corporate executives. If higher education wishes to maintain its privileged position in American society, it needs to contain its spending. A good place to start is at the top.

Heartland’s Jay Lehr on the Today Show: No Need to Panic about 400 ppm CO2

Tolls and Taxation No Cure for Bad Rhode Island Bridges

The Other Nuclear Country

Intellectual Property: Everyone Loves Getting Paid For It – Everyone Hates Paying For It