Top Posts
A Vision for Tobacco Policy; 2020 Edition
The Super Bowl Proves that America Is Not...
Prosperity and Inequality
Heartland Weekly – Canceling Student Debt Would Be...
Independence Day in Britain!
Miss Virginia Makes the Grade
The Thunberg Fallacies
Dr. Richard Keen, R.I.P.
Government Spending Gets Even More Out of Control
Polar Bears: The End of a Climate Delusion...
Home Featured Slow the Presses!

It has been a difficult time for newspapers. The industry  has experienced serious challenges due to multiple factors going back at least  to the early 1960s when the three major television networks began their  extensive and widely popular evening news programs, with the likes of Walter Cronkite, Chet Huntley and David Brinkley.

The rise of the Internet over the last two decades has posed  a much larger challenge. More people were able to access more interactive news  sources, including the Internet editions of major newspapers, nearly all of  which were free in the beginning. Then there was Apple, with its  ground-breaking iPad which made accessing news sources more user-friendly. Newspapers  competed hard to design their own applications, which often required paid  subscriptions. Of course, Ipad has competitors now and many newspapers have  implemented paid firewalls for their Internet sites.

However, the Great Recession may have dealt the most  important blow to the print edition. The collapse of the housing market brought  a catastrophic decline in real estate and help wanted classified advertisements,  a key source of revenues. Added to this was a drop in overall business, which  also reduced advertising revenues.

Some large newspapers such as The Wall Street Journal,and The  New York Times claim they have gained circulation. However, looking beneath  the gross numbers provided by the Alliance  for Audited Media, it is clear that virtually all of the gains are in online editions, while print editions continue to decline. Even the online gains  may be overstated, because a print edition subscriber who is also an online edition subscriber gets counted twice for the same newspaper.

A review of the change in circulation in the nation’s 20  largest newspapers since 1998 indicates the depth of the losses. The year 1998  is chosen because newspaper circulations remained at high levels and the losses  to Internet editions and other media sources has not yet occurred.

From 1998 to 2013, the 20 largest newspapers lost more than 5 million of their 13.4 million weekday print subscribers, a loss of nearly  four out of ten subscribers (39 percent). At the same time, there were  substantial differences among the top 20 papers in their losses (Table).

All of the newspapers lost subscribers, but some lost many  more than others. The New York Post, a tabloid owned by Rupert Murdoch, posted the  smallest loss, less than 30,000 of its 1998 subscriber base of 438,000.

USA Today,  Gannett’s unique national general-interest newspaper, experienced the second  smallest loss, at 13.8 percent. USA Today, also the newest newspaper  on the list (1982), is the nation’s second-largest newspaper and fell from a  circulation of 1.65 million in 1990 to 1.42 million in 2013.

Another Murdoch title, The Wall Street Journal, purchased in 2007, did a third-best in holding onto its print readership. The Journal retained its position as the largest daily newspaper in the nation, with  circulation dropping from 1.74 million in 1998 to 1.48 million in 2013. This  amounted to a small loss compared to other newspapers (14.9 percent). The  260,000 loss in actual subscribers was larger than the total current daily circulation of 10 of the top 20 US newspapers  (such as the Houston Chronicleand The Boston Globe).

The nation’s third largest newspaper, The New York Times, lost nearly  one-third of its print circulation between 1998 and 2013.  Even so, this was less than the loss rate of all but three newspapers (The New York Post, The Wall Street Journal and USA Today).

The largest relative circulation loss was atThe Boston Globe, which saw a departure of nearly two-thirds (63.5 percent) of its  subscribers. This was more than double the losses by its owner, The New York Times.

Two other newspapers lost 60 percent or more of their  readers between 1998 and 2013.  The Chicago Sun-Times experienced a loss of 62 percent while The Dallas Morning News saw 60  percent of its subscribers flee. This huge loss is particularly notable, given  that the Dallas-Fort Worth metropolitan area is one of the fastest growing regions  in the world. For example, in Phoenix, which has also grown very rapidly, the Arizona Republic lost only one third of its readership, having taken advantage of the rapidly  expanding market.

Perhaps most disastrous has been the decline at the Los Angeles Times. For more than two decades, the LA Times had been the nation’s third or fourth largest newspaper,  following The Wall Street Journal, USA  Today and sometimes The New York  Times. This ranking was not much changed in 2013, as the LA Times was the fourth largest  newspaper. 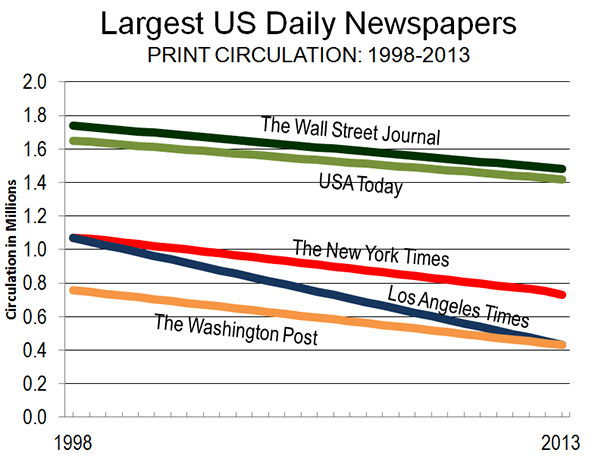 In raw subscriber numbers, the LA Times losses were the most precipitous by far at 635,000,  compared to second largest loss at the New York Daily News at 363,000. The Daily News continues a long slide,   having been the nation’s largest newspaper for  decades to the 1970s. It is now the third-largest paper in the three paper New  York City market, having been passed by the New  York Post some time ago. The Daily News,  however, still leads the suburban Newsdayand Newark Star-Ledger.

Some of the larger declines in newspaper circulation are not  evident in the latest data. For example, The  San Francisco Chronicle experienced a drop of 65 percent in its  circulation from 1998 to 2012 (2013 data not available). The spectacular  decline of Detroit’s two metropolitan dailies has outstripped all of the others  over a longer period of time. In the middle 1980s, the Detroit Free Press and the Detroit News each had  circulations of approximately 650,000. By 2012, the Free Press had fallen to approximately 135,000 and the News to under 80,000. These drops were  much larger than the city of Detroit’s population loss. Now, the two papers  offer home delivery only three days of the week (Thursday, Friday and Sunday),  while subscribers are encouraged to use internet editions on other days.

Of course, over the last 15 years, a number of familiar  titles have been closed, such as the Rocky  Mountain News (Denver), the separate Atlanta Journal and Constitution (now  combined as the Atlanta Journal-Constitution)  and the Cincinnati Post. The Seattle  Post-Intelligencer took the intermediate step of shutting down its  print edition, but retaining an Internet edition, which has remained a strong  presence online.

There have been other changes as well. Virtually all of the US  broadsheets (the wide, familiar print format) are now printed in more compact editions, having been reduced from approximately 15 inches wide to 12 or even  11 inches wide (28, 30.5 and 38 centimeters). There are international format  changes, as well. The Times of London (weekday edition) converted from broadsheet to tabloid in 2004, while The Sydney  Morning Herald and Melbourne’s uniquely named The Age switched to tabloid format in March.

The communications business has changed  over  the past two decades. Newspapers have been trying to cope, but it seems unlikely that print editions will experience any resurgence. The open question  is whether the newer online strategies will save them from oblivion, but that’s  hard to predict.

Americans Fighting Their Own Government For Economic Survival

For Many Americans, It’s a Very Unhappy Fourth