This may be a surprising headline to readers of The Wall Street Journal and the Washington Post, which reported  virtually the opposite result in their August 19 editions. The stories, “Hip,  Urban, Middle-Aged: Baby boomers are  moving into trendy urban neighborhoods, but young residents aren’t always  thrilled,”
by Nancy Keates in The  Wall Street Journal and “With  the kids gone, aging Baby Boomers opt for city life,” by Tara Barampour in  the Washington Post reported on  information from the real estate firm, Redfin (a link to the corrected Wall Street Journal story is below).  Both stories reported virtually the same thing: that 1,000,000 baby boomers  moved to within five miles of the city centers of the 50 largest cities between  2000 and 2010. Because these results appeared to be virtually the opposite of  census results, I  contacted both papers seeking corrections.

When pressed for more information, Redfin.com responded with a tweet indicating that: “We don’t have a link to share or published  study; Redfin did a special analysis of Census data at reporters’ requests.”

In fact, the census data shows virtually  opposite. Redfin’s method was not clear, so I queried the five mile radius  within the main downtown areas of the 51 metropolitan areas with more than  1,000,000 population in 2010, shown below in the table and the figure.

To its credit, The Wall Street Journal issued a correction, as I would have  expected.  The incorrect reference to an increase of baby boomers in the urban cores was  removed. To my surprise, not only did the Washington Post fail to make a correction, but they also ignored  multiple requests to deal with the issue (though my emails received courteous computer  generated acknowledgements).

With the ongoing repetition of the “return to  the city from the suburbs” myth, it is important to draw conclusions from the  data, not from impressions. 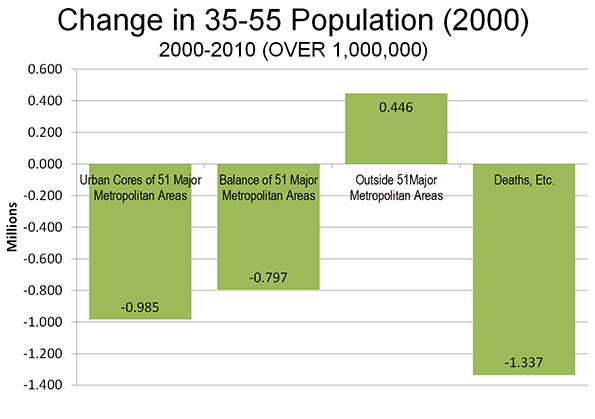 Sauce for the Goose

Bill McKibben Toys with Climate Facts for Fun and Profit

Privatization to the Rescue

Proposed Committee Chance to Prove Climate Science Settled, So Why the Opposition?

John Stuart Mill and the Dangers of Unrestrained Government

Who Has Constitutional Rights? Trump Raises the Question