New data from the American Community Survey makes it  possible to review the trend in mode of access to employment in the United  States over the past five years. This year, 2012, represents the fifth annual  installment of complete American Community Survey data. This is also a  significant period, because the 2007 was a year before the Lehman Brothers  collapse that triggered the Great Financial crisis, while gasoline prices  increased about a third between 2007 and 2012.

The work trip access data is shown in Tables 1 and 2.  Driving alone continued to dominate commuting, as it has since data was first  reported in the 1960 census. In 2007, 76.1 percent of employment access was by  driving alone, a figure that rose to 76.3 percent in 2012. Between 2007 and  2012, driving alone accounted for 94 percent of the employment access increase,  capturing 1.55 million out of the additional 1.60 million daily one-way trips  (Figure 1). The other 50,000 new transit commutes were the final result of  increases in working at home, transit and bicycles, minus losses in car pooling  and other modes.

Carpools continued to their long decline, losing share in 43  of the 52 major metropolitan areas. Approximately 810,000 fewer people travel  to work by carpools in 2012, which reduced its share from 10.7 percent to 9.7  percent. 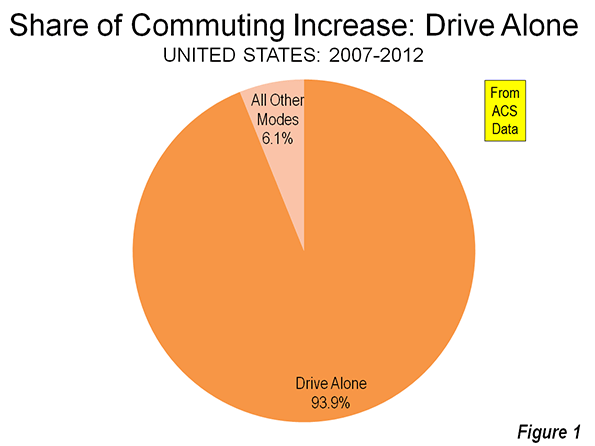 Transit did better, rising from 4.9 percent of work access  in 2007 to 5.0 percent in 2012. There was an overall increase of approximately  250,000 transit riders. This increase, however, may be less than might have  anticipated in view of the much higher gasoline prices and the imperative for  commuters to save money in a more difficult economy.

Walking retained its 2.8 percent share, with only a modest  15,000 increase over the period. The largest increase in employment access outside  single occupant driving was working at home, which rose from 4.1 percent to 4.4  percent. This translated into an increase of approximately 470,000.

Consistent with its low drive alone market share, New York  led by a large margin the other metropolitan areas in its transit work trip  market share. Transit carried 31.1 percent of New York commuters, up nearly a full  percentage point from the 30.2 percent in 2007. New York alone accounted for  nearly one-half of the growth in transit commuting over the period.

San Francisco continued to hold onto second place, with a  15.1 percent transit market share, up a full percentage point from 2007.  Washington rose to 14.0 percent, up from 13.2 percent in 2007. Boston (11.9  percent) and Chicago (11.0 percent) were the only other major metropolitan  areas to achieve a transit work trip market share of more than 10 percent, and  were little changed from 2007.

Working at home continued to increase at a larger percentage  rate than any other mode of work access. Four metropolitan areas were tied for  the top position in 2012, at 6.4 percent. These included Raleigh, Austin, San  Diego, and Portland, all metropolitan areas with a strong high-tech orientation.  In San Diego and Portland, where large light rail systems have been developed,  working at home is now more popular as a mode of access to work than transit.

This concentration of transit commuting was most evident to  the six large “transit  legacy cities,” (the core cities of New York, Chicago, Philadelphia,  San Francisco, Boston, and Washington), which still exhibit sufficient remnants  of their pre-automobile urban cores that support extraordinarily high transit  market shares. The transit legacy cities accounted for 55 percent of all  transit commuting destinations in the United States, yet have only six percent  of the nation’s jobs. Between 2007 and 2012, the concentration increased, with transit  legacy cities accounting 68 percent of the additional transit commutes were between  2007 and 2012. Outside the legacy cities, there was relatively little  difference in the share of transit commutes within metropolitan areas with legacy  cities and in the other major metropolitan areas (Figure 2) 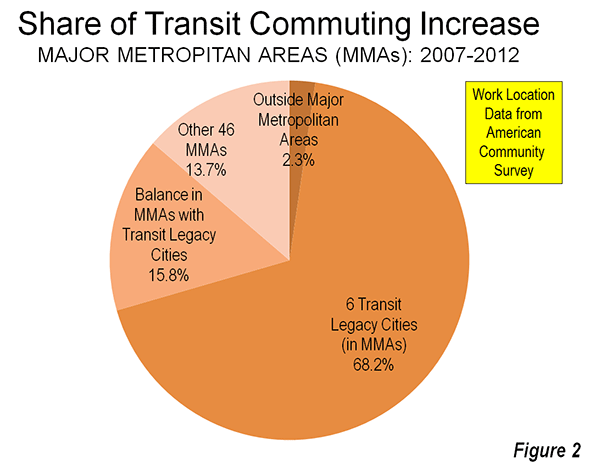 The key to the intensive use of transit in the legacy cities  is the small pockets of development that are particularly amenable to high  transit market shares – the six largest downtown areas (central business  districts) in the United States. Most  of the commuting to transit legacy cities is to these downtown areas, Yet,  the geographical areas of these downtowns is very small. Combined, the six  downtown areas are only one-half larger than the land area of Chicago’s O’Hare  International Airport. This yields employment per square mile densities of from  40 to 150 times densities of employee residences throughout their respective  urban areas.

Not surprisingly, transit has very strong market shares to  work locations in the transit legacy cities, at 45.8 percent. At the same time,  transit commuting to locations outside the transit legacy cities is generally  well below the national average. The exception is New York, where transit  commuting to suburban locations is 6.4 percent, above the overall national  average of 5.0 percent. In the five other metropolitan areas with transit  legacy cities, transit commuting to suburban locations is 3.9 percent. This  drops to 3.1 percent, overall, in the 46 other major metropolitan areas and 1.1  percent in the rest of the nation (Table 2 and Figure). 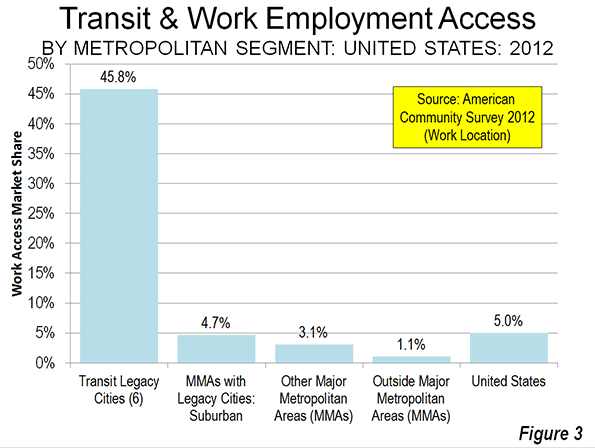 The big news in the last five years of commuting data is that  virtually nothing has changed. This is remarkable, given the greatest economic  reversal in 75 years and continuing gasoline price increases that might have  been expected to discourage driving alone. Yet, driving alone continues to  increase, while the most cost effective mode of car pooling continued to suffer  huge losses, while working at home continued to increase strongly.

Wendell Cox is a Visiting Professor, Conservatoire National des Arts et Metiers, Paris and the author of “War on the Dream: How Anti-Sprawl Policy Threatens the Quality of Life.

The Myth of Global Gluts and the Reality of Market Change

In The Tank (ep163) – Twitter Bans The Gay Patriot

Playing Both ‘Cops and Robbers’ on Asset Forfeiture

Heartland Weekly: Heartland Heads to Rome to Tell Pope Francis: Global Warming is Not a Crisis!