The nation’s lackluster economic performance continues to be  a concern. This is evident in stubbornly high unemployment rates (See: Suburban  and Urban Core Poverty: 2012 Special Report),which continue to be well  above historic norms. There is another indicator, which may be even more  important – underemployment. This figure, 80 percent above the unemployment  rate, can be used as a measure of the “output gap,” which a Congressional Research  Service (CRS) report refers to as “the rate of actual output (economic)  growth compared with the rate of potential output growth.” CRS continues:  “Potential output is a measure of the economy’s capacity to produce goods and  services when resources (e.g., labor) are fully utilized” (Note 1).

However, there was a much larger number of involuntary part  time workers, at 8.1 million in 2012. This is nearly two-thirds of the 12.5  million workers unemployed in 2012.

The number of underemployed may be higher. Gallup  estimated the nation’s underemployment rate at 17.4 percent in August, well  above the BLS August figure of 14.7 percent. The Gallup estimate would place  underemployed workers at more than 27 million. This is approximately equal to  all of the combined employment in the first and second largest states,  California and Texas, as well as Colorado (Figure 1). 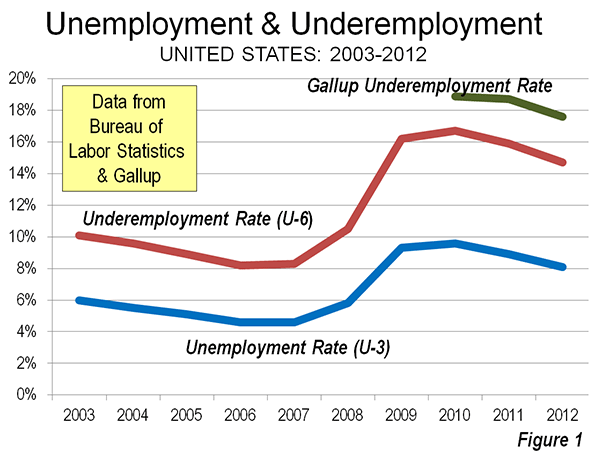 Indeed, the number of underemployed could be higher yet.  Economists Richard Vedder, Christopher Denhart, and Jonathan Robe at the Center  for College Affordability and Productivity have estimated that 48 percent  of employed college graduates hold jobs that do not require college degrees,  using BLS data. None of these, as long as they are full time employees, would  be included in the underemployment figures.

In addition to its monthly national estimates, BLS provides quarterly, year-on-year  estimates by state, but only for Los Angeles County and New York City below  the state level. Data is shown for 2006, the year of the best underemployment rate  in the last decade, 2010, with the worst underemployment rate and the most  recent year for which data is available, ending June 30, 2013 (Table). 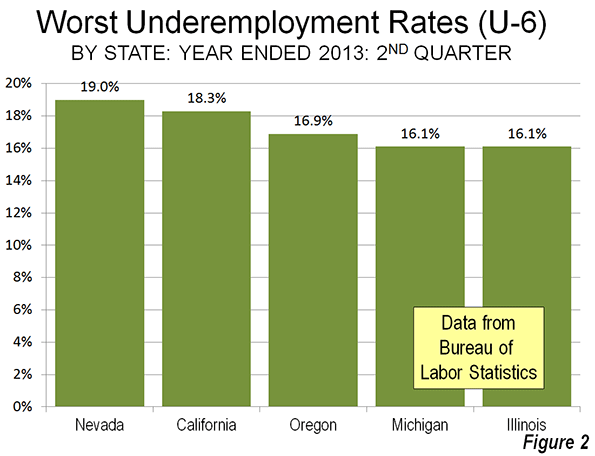 Over the past decade (2003 through 2012), four of these  states were among the five with the highest underemployment rates. Michigan,  hard hit by manufacturing losses, had the highest average underemployment rate  (15.6 percent), followed by California and Oregon (both at 14.8 percent), South  Carolina (13.8 percent) and Nevada (13.7 percent). For the most part,  underemployment has become intractable in these states. Only Nevada, with its  precipitous decline from the housing crisis ranked better than 40th  worst in underemployment in any year between 2003 and 2012 (Figure 3). 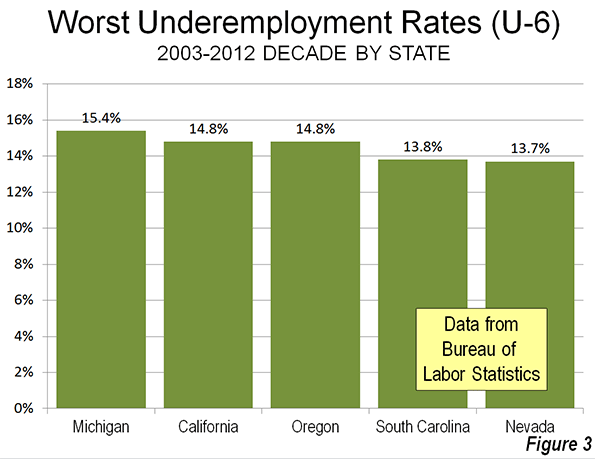 The best underemployment rates were literally concentrated  in five adjacent states with strong energy sector states, principally in the  Great Plains. North Dakota led the nation for the year ended June 30, 2013,  with an underemployment rate of 6.2 percent, less than one-half the national  rate (14.7 percent) and less than one-third the rates of Nevada and California.  North Dakota’s neighbor to the south, South Dakota had the second best rate, at  7.8 percent, while   Nebraska ranked third at 8.7 percent. On  Nebraska’s western border, Wyoming, the only non-Plains state in the top five, ranked  fourth with an underemployment rate of 9.0 percent. Nebraska’s eastern  neighbor, Iowa, ranked fifth, at 9.5 percent (Figure 4).

As with the states with the worst underemployment rates over  the last decade, those with the lowest  current  figure also did best from 2003 and 2012. North Dakota is again number one, with  an underemployment rate of 6.7 percent. Nebraska (7.5 percent), South Dakota  (7.7 percent) and Wyoming (8.2 percent) follow, with New Hampshire ranking  fifth best, at 8.8 percent (Figure 5). 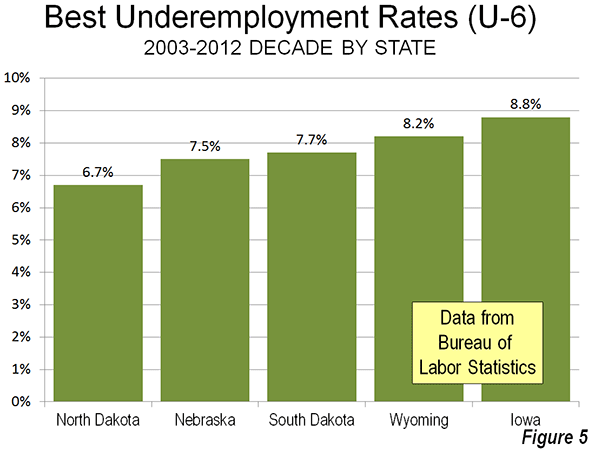 For the year ended June 30, 2013, the city of New York had  an underemployment rate of 15.1 percent, somewhat above the national rate of  14.3 percent. Over the past decade, the state of New York’s underemployment  rate has been lower than that of the city in every year.

The productivity gap that results from underemployment  constrains the US economy at a time of unusually severe financial challenges.  College graduates face not only a grim employment market, but have student loan  repayments that require good jobs. The nation continues to spend more than it  collects in taxes. The inability of state and local governments to fund their  government employee pension programs could lead, in the worst case, to much  higher taxes or severe service cutbacks.

Yet things could get worse. The soon to be implemented “Patient  Protection and Affordable Care Act” (“Obamacare”) has a built-in incentives for  employers to shift workers to part time status (weekly schedule of fewer than  30 hours of work per week). The law exempts them from providing health  insurance for employees who work part time and so some establishments are  shifting full time employees to part time status. Others establishments may  substitute hiring part time employees instead of full time to reduce their  expenses. This incentive is not just being executed by private companies  seeking to maintain profitability. It extends to state and local government agencies,  which unlike the federal government, must balance their books each year.  According to a running of enterprises announcing shifts to part-time by Investors  Business Daily, more than 75 percent are government agencies.

All of this points to two important policy implications. The  first is the necessity of focusing on the underemployment measure, the  improvement of which is so crucial to maintaining and improving the standard of  living and reducing poverty (by reducing the productivity gap). The second is  that, with such a focus, policy makers from Washington to Sacramento, Lansing,  and Carson City must pursue policies that encourage investment and employment.

Wendell Cox is a Visiting Professor,  Conservatoire National des Arts et Metiers, Paris and the author of “War on the Dream: How Anti-Sprawl Policy Threatens the  Quality of Life.

Note 1: A detailed comparison of the unemployment (U-3) and  underemployment (U-6) rates is provided by economist Ed  Dolan. A useful chart comparing the two indicators, with numbers from June  2012 will be found on qz.com.

Note 2: Vedder, Denhart and Robe also suggest the  possibility of “over-investment,” as more students may have been encouraged to  higher education levels than there are likely to be correspondingly appropriate  jobs. The extent of such over-investment is not known.

America’s Health Care in Crisis: Fighting Back Against Obamacare

The Environmental Enemies of Energy

Weather Channel Founder on ‘The Kelly File’: Al Gore Got a ‘D’ in Only College Science Class

In The Tank (ep165) – State Policy and the Midterms, China Social Credit Scores

Heartland Daily Podcast – Steve Buckstein: Oregon May Become One of the Worst Places to Do Business

The State Is Not Your Proxy