The 2013 annual metropolitan area population estimates by the US Census Bureau indicate a continuing and persistent dominance of population growth and domestic migration by the South. Between 2010 and 2013, 51 percent of the population increase in the 52 major metropolitan areas (over 1 million population) was in the South. The West accounted for 30 percent of the increase, followed by the Northeast at 11 percent and eight percent in the North Central (Midwest).

There was a substantial gap in the natural increase (births minus deaths) between the regions as well. The West (2.1 percent relative to the 2010 population over the three years) lead the South (2.0 percent) slightly in rate. Both were well ahead of the Midwest at 1.5 percent and especially the Northeast, at 1.2 percent (Table 1).

The New York metropolitan area continues to hold the top position, having added nearly 400,000 residents since 2010 to rise to a population of 19,950,000 residents. At its current rate of growth, New York will exceed a population of 20 million in 2014. There was a time that many expected second-place Los Angeles to overtake New York. However, since 1990 the New York population advantage over Los Angeles has expanded from 6.1 million to 6.8 million, including a further 80,000 advantage built up since 2010 (present geographical definitions). Part of this because much of the growth has been pushed to the more distant Riverside-San Bernardino area.

Los Angeles and Chicago continued to retain the second and third positions, which they seem likely to maintain for decades. Population projections by the National Conference of Mayors indicates strong growth in Dallas-Fort Worth and Houston over the next three decades could have them by pass Chicago by 2050. The challenge could be even more immediate, since Chicago’s growth rate over the first three years of the decade is approximately one half the annual rate projected by the US Conference of Mayors between 2012 and 2042.

Late in the last decade, Dallas-Fort Worth passed Philadelphia to become the fourth largest metropolitan area. Then, Philadelphia was passed by Houston in 2011. The result is that, for the first time since the nation’s founding, two of the five largest cities (which are functionally defined as metropolitan areas) are in a single state (Texas).

Philadelphia seems likely to fall further. The strong growth rate of seventh ranked Washington suggests that this nearby rival may also pass Philadelphia as early as 2015. Eighth ranked Miami is growing fast enough that it also could drop Philadelphia a position, to 8th place the 2020 census.

But Philadelphia is not the only metropolitan area in relative decline. Detroit started the decade as the nation’s 12th largest metropolitan area, but has since fallen to 14th. Detroit has been passed by both Riverside-San Bernardino and Phoenix. Phoenix rose 14th to 12th, passing Riverside-San Bernardino (which remained in 13th position) in the process.

Net domestic migration is, not surprisingly, dominated by the major metropolitan areas of the South, especially Texas and Florida. Dallas-Fort Worth and Houston led the nation with more than 100,000 net domestic migrants (Figure $$$). Austin placed third in San Antonio was sixth. Charlotte ranked seventh, while the Florida entries Orlando stood at eighth and Tampa-St. Petersburg at 10th. The West had three big domestic migration lures, Phoenix (4th), Denver (5th), and Seattle (9th). 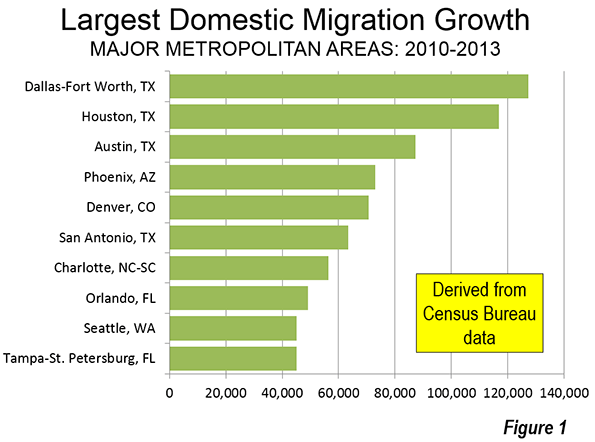 Austin also led in the percentage of net domestic migration gain relative to its 2010 population. Again, nine of the top gainers were in the South, with one entry from the West, Denver (Figure 2). 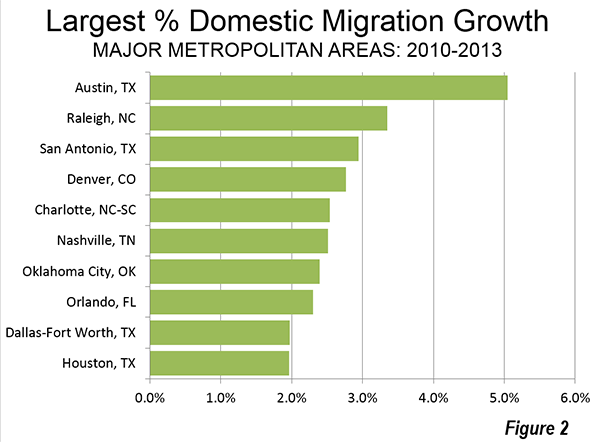 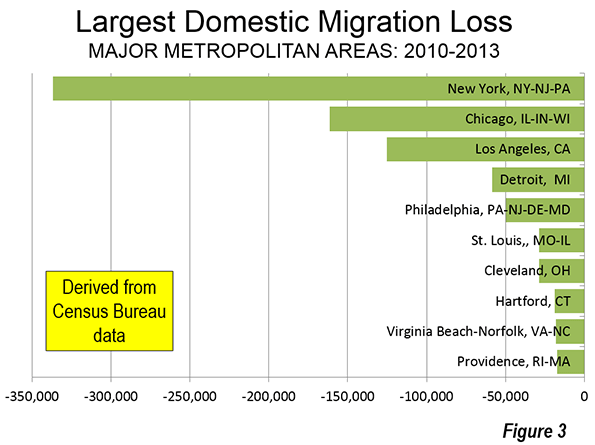 Migration Gains in the Suburbs, Losses in the Core

This year was notable for the virtual absence of the customary “return to the city” stories. In recent years, historical core municipalities have done better in population growth than in the past. In previous decades, some lost large amounts of their population. However, an improving urban environment, not least because of better crime control, has led to something of a residential resurgence, especially in the immediate area of downtowns, though inner core populations (within five miles of City Hall) have continue to decline (see Flocking Elsewhere: The Downtown Growth Story). 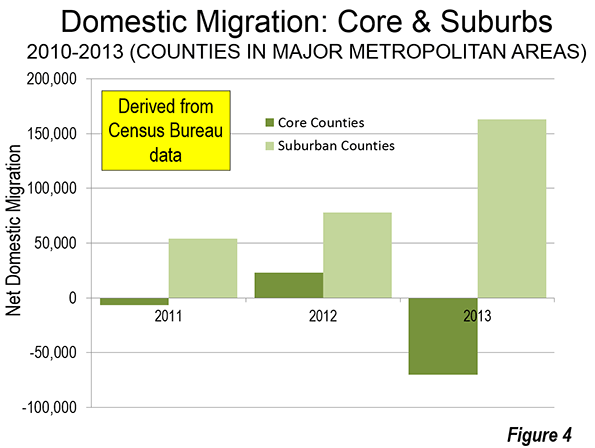 With the economy still depressed, it would be premature to declare that the more typical results of the last year presage a return to normalcy. Any such reliable judgment must await restoration of broad-based, job and salary driven – as opposed to asset-based – economic growth. However, the trends of the last year indicate more than anything that the basic patterns of at least the past quarter century – with higher suburban growth and a shift towards the South – to be reasserting themselves.

The Anatomy Of A Mass Media Fake News Lie