The fortunes of U.S. core cities (municipalities) have varied greatly in the period of automobile domination that accelerated strongly at the end of World War II. This is illustrated by examining trends between the three categories of “historical core municipalities” (Figure 1). Since that time, nearly all metropolitan area (the functional or economic definition of the city) growth has been suburban, outside core municipality limits, or in the outer rings of existing, core municipalities. 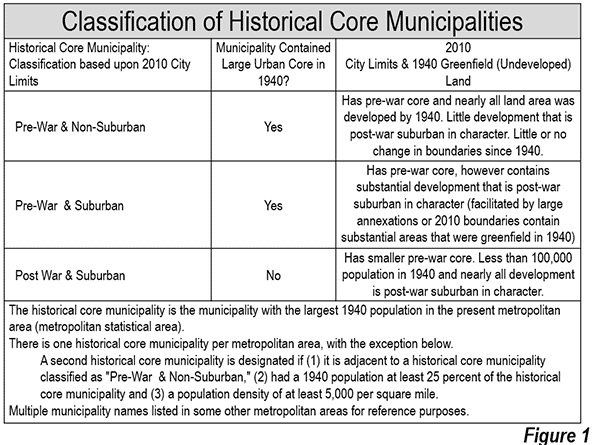 Approximately 26 percent of major metropolitan area population is located in the core municipalities. Yet, many of these municipalities include large areas of automobile orientation that are anything but urban core in their urban form. Most housing is single-detached, as opposed to the much higher share of multi-family in the urban cores, and transit use is just a fraction of in the urban cores.

Even counting their essentially suburban populations, today’s core municipalities represent, with a few exceptions, a minority of their metropolitan area population. The exceptions (San Antonio, Jacksonville, Louisville, and San Jose) are all highly suburbanized and have annexed land area at a substantially greater rate than they have increased their population.

According to the 2010 census, using the 2013 geographic definitions, core cities accounted for from five percent of the metropolitan area population in Riverside-San Bernardino to 62 percent in San Antonio (Figure 2). 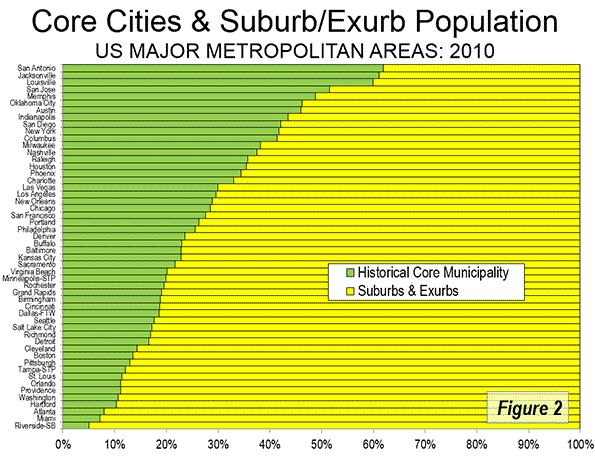 These virtually random variations in core city sizes lead to misleading characterizations. For example, locals sometimes point out that San Antonio is the 6th largest city in the United States. True, San Antonio is the 6th largest municipality in the United States, but the genuine, classically defined city – the broader metropolitan area that is the urban organism – ranked only 26th in size in 2010. The suburbs and exurbs, as defined by municipal jurisdictions, are smaller than average in San Antonio, but the city itself stretches in a suburban landscape up to more than 15 miles (24 kilometers) beyond its 1950 borders. 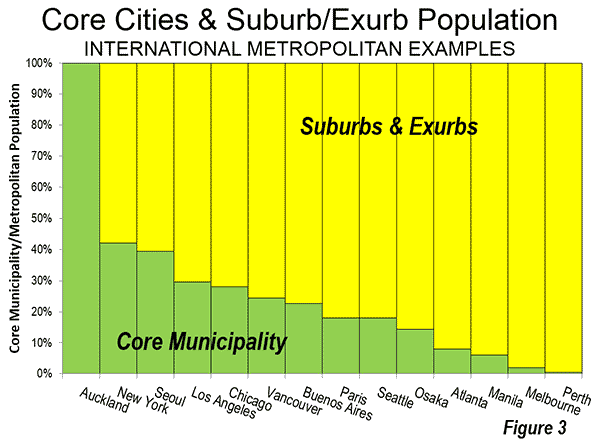 Core Municipalities in the United States

A remnant of U.S. core urbanization is evident within the city limits of municipalities that were already largely developed in 1940 and have not materially expanded their boundaries. These are the Pre-World War II Core & Non Suburban category of core municipalities. Between 1950 and 2010 these core municipalities lost a quarter of their population, dropping from 24.5 million residents to 19.3 million (Figure 4). All but Miami lost population. Despite improved downtown population fortunes, the last decade saw a small further decline of 0.2 percent overall. Only two legacy cities, New York and San Francisco, now exceed their peak populations of the mid-20th Century. 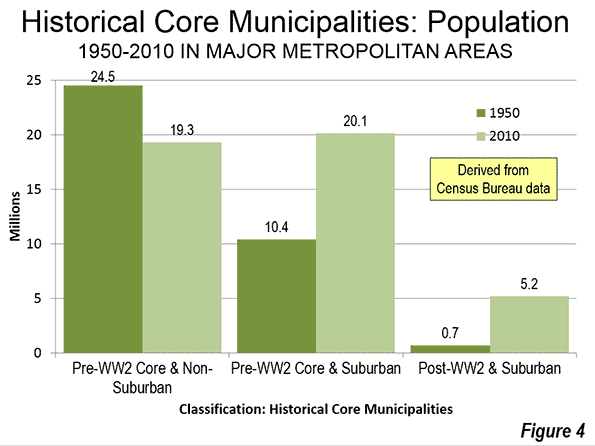 Again, this is the typical pattern internationally. Throughout the high-income world, the urban cores that have not expanded their boundaries and had little greenfield space for suburban development have had declining in population for years. My review of 74 high income world core municipalities that were fully developed in the 1950s and have not annexed materially showed that only one had increased in population by 2000 (Vancouver). Since that time, a few that had experienced more modest declines have recovered to record levels, such as Munich and Stockholm. Most others, such as London, Paris, Milan, Copenhagen and Zurich remain below their peak populations.

In the United States, most of the strong growth has taken place in the “Pre-World War II & Suburban” classification, doubling from 10.1 million residents to 20.4 million since 1950. These include core cities with strong pre-war cores, but which have either annexed large areas or already contained large swaths of rural territory at that time (like Los Angeles, with its San Fernando Valley, which was largely agricultural) that later became heavily populated.

Many of these core cities experienced population declines within their 1950 boundaries (such as Portland, Seattle and Nashville between 1950 and 1990). Los Angeles, however, has been the exception. The more highly developed central area (as defined by the city Planning Department) within the city limits has increased in population by one-third since 1950. The continuing suburbanization of the city of Los Angeles, however, is indicated by the fact that the central area’s share of city population has fallen from 68 percent to 47 percent.

Land Area: The differences between the three historical core municipality classifications are most evident in land area. Among the “Pre-World War II & Non-Suburban” cores, land areas were almost unchanged from 1950, with much of the difference reflected in Chicago’s O’Hare International Airport annexation. In contrast, the “Pre-World War II & Suburban” cores more than tripled in size, adding an area larger than Connecticut to their city limits. The percentage increase was even larger in the “Post-World War II & Suburban” cores which covered 10 times as much land in 2010 as in 1950 (Figure 5). 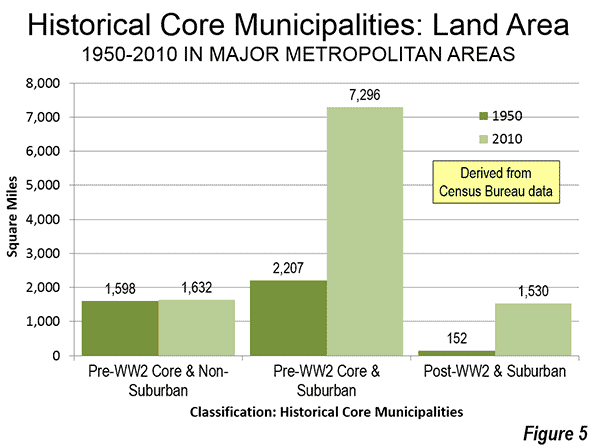 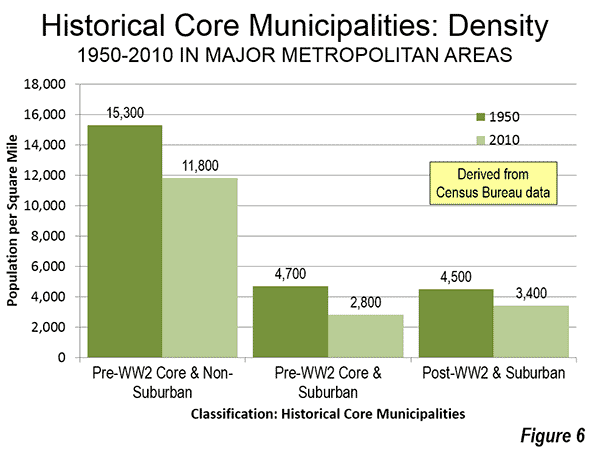 The Need for Caution

All of this indicates the importance of caution with respect to core versus suburban and exurban comparisons. For example, Atlanta, which represents only 8 percent of the urban organism (metropolitan area) in which it is located is not comparable to San Antonio, with its 62 percent of the metropolitan population. These distinctions are important when we talk about different regions.

The Slow Erosion of the Fourth Amendment

Does the Doctor Need a Boss?

The Amtrak Crash: When Government is Ideological Instead of Lawful and Logical