Top Posts
A Vision for Tobacco Policy; 2020 Edition
The Super Bowl Proves that America Is Not...
Prosperity and Inequality
Heartland Weekly – Canceling Student Debt Would Be...
Independence Day in Britain!
Miss Virginia Makes the Grade
The Thunberg Fallacies
Dr. Richard Keen, R.I.P.
Government Spending Gets Even More Out of Control
Polar Bears: The End of a Climate Delusion...
Home Environment/Energy Heartland Institute awards scientists that dared to challenge climate change 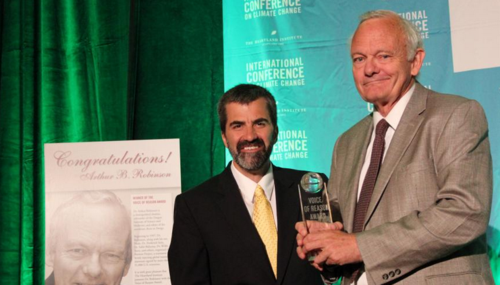 Ongoing today in this nation is a full court press to convince the public that everybody knows that a catastrophic global warming looms over us, that human beings are the cause of it, and that the only solution is to turn more money and power over to the government to stop us from our dangerous ways of living.

The earth can be either warm or cool and has done both at one time or another for thousands of years, even before there were SUVs. Had there never been any global warming in the past, enjoying a visit to Yosemite Valley today would be impossible as it was once buried under thousands of feet of ice.

Forty-five years ago in the 1970’s, the environmental hysteria was all about the dangers of a new ice age. This hysteria was spread by many of the same individuals who are promoting today’s hysteria about global warming.

Today the far the political left’s favorite argument is that there is no argument, that science is settled, despite the cooling trend in the 70’s and now the absence of any warming for 17 years and 10 months.

Radical environmentalist Al Gore believes that disasters around the world can only be avoided by imposing a new form of authoritarian government.  Democracy is dismissed as a model that can sustain the world.  How then do climate alarmists like Al Gore explain the following discrepancy? Progress on the environmental front has been steady over the last half century without the transformative agenda now being proposed and enacted by President Obama to save the planet.

To President Obama climate change policies represent an important plank of his political agenda, one that Obama wants noted as an important presidential legacy achievement. Obama unequivocally accepts the claims made by climate change alarmists that are set forth by the United Nations Intergovernmental Panel on Climate Change (IPCC). He is not at all hesitant to bash what he calls “climate deniers” and their obstruction by daring to debate science behind man-made global warming.  So it was on Friday, May 9, in a speech at a California Wal-Mart that Obama once again proclaimed “climate change as a fact” and that climate change skeptics are wasting everybody’s time on a settled debate.

In the mindset of President Obama, storms, floods and droughts have been made more severe by rising global temperatures.  This despite a report by IPCC that shows there “is limited evidence of changes in extremes associated with other climate variables since the mid-20th century” and current data shows “no significant observed trends in global tropical cyclone frequency over the past century. … No robust trends in annual numbers of tropical storms, hurricanes and major hurricanes counts have been identified over the past 100 years in the North Atlantic basin.”

In keeping with the “science is settled” argument falsely being conveyed to gullible Americans by Al Gore, the Obama administration, other radical environmentalists, and the mainstream media, it was gratifying and most appropriate that nine individuals (with a surprise tenth award), were selected prior to Heartland’s recent 9th International Conference on Climate Change through a request process solicited by The Heartland Institute for ideas and nominations of individuals world-wide who were willing to speak out against global warming alarmism. Without shame, The Heartland Institute considers it a badge of honor to have been called by The Economist in a May 26, 2011 article “the world’s most prominent think tank promoting skepticism about man-made climate change.”

Heartland’s ten award recipients, all global warming skeptics accorded by President Obama as climate deniers, are but representative of countless of scientists who are routinely shunned by politically correct universities and scientific societies by simply speaking truth to power. Climate skeptics or deniers often take great risks regarding their personal safety and their professional careers, which have cost them the promotions and rewards they might have otherwise received from their peers. Government money falls on those who seek grants to study global warming and then produce solutions for it.  That money is not likely to fall on skeptic in the scientific community who refuse to join the global warming stamped.

The awards delivered at Heartland’s conference were sponsored by eight organizations. Their purpose was to give long-overdue recognition and encouragement to the recipients, increase public awareness of the global warming realism movement, and send a signal to the academy and other elite institutions saying if they won’t recognize our heroes, The Heartland Institute will.  All of the ICCC9 videos can be viewed at this site.

Following are the ten award winners — global warming heroes — individuals you should know about who are deserving of your praise and congratulations for their willingness to speak out about global warming alarmism:

It is worth noting that Dr. Art Robinson, as the internationally respected scientist that he is, is running in Oregon Congressional District 4 against Democrat Peter DeFazio, who cast one of the four deciding votes for Obamacare after telling Oregonians he would vote against it.  This is Art Robinson’s third attempt to defeat Democrat Peter DeFazio, the first attempt being in 2010. Robinson wants to restore sorely needed common sense in Washington, D.C.   He is not afraid to speak up publicly on behalf of sound science and common sense.  May he encourage others to follow the same course of action in the political arena.

Robinson’s book, Common Sense in 2012, although published and distributed in 2012, is just as relevant to the problems this nation is facing today as it was two years ago.

This is your chance to get behind candidate Art Robinson, Ph.D., one of the ten distinguished award winners at Heartland’s Ninth International Conference on Climate Change. Send an outstanding scientist to Congress in November. His “Voice of Reason Award” should serve him well in his role as a U.S. Congressman on the Chamber floor.

The Nemesis of Agenda21

What if Obama’s Climate Change Policies are Based on pHraud?

What Really Triggers a Resource Crisis?