Finally, there is credible housing affordability data from China. For years, analysts have produced “back of the envelope” anecdotal calculations that have been often as inconsistent as they have been wrong. The Economist has compiled an index of housing affordability in 40 cities, which uses an “average multiple” (average house price divided by average household income) (China Index of Housing Affordability). This is in contrast to the “median multiple,” which is the median house price divided by the median household income (used in the Demographia International Housing Affordability Survey and other affordability indexes). The Demographia Survey rates affordability in 9 geographies, including Hong Kong (a special administrative region of China). The average multiple for a metropolitan market is generally similar to the median multiple.

The Economist Data and Methodology

The Economist develops its ratio from central government data on house sales and incomes in individual cities. Like the Demographia Survey, The Economist provides estimates for housing affordability from the perspective of the average urban household, as opposed to the “ex-pat” or “luxury” markets that are typically reported by real estate commentators. The Economist also estimates its price to income ratio using an average house size of 100 square meters (approximately 1,075 square feet). This is larger than the average new house size in the United Kingdom, but smaller than those in the United States, Australia, Canada and New Zealand. 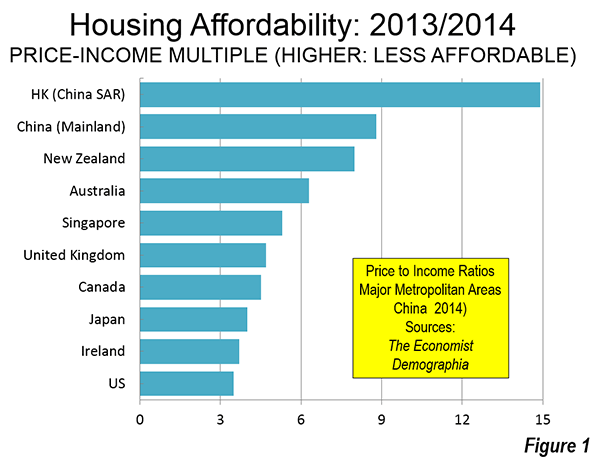 For years, there have been press reports of astronomic price to income multiples in China. The Economist data indicates that in some cities (Shenzhen, Beijing, Hanghzou and Wenzhou) this has indeed been true. But incomes have risen faster than house prices in recent years, and average multiples above 20 are, for now, a thing of the past.

China’s most affordable city is Hohhot, capital of Inner Mongolia (Nei Mongol), with an average multiple of 4.9. Generally, interior cities had better housing affordability than those along the east coast. For example, Changsha (capital of Hunan) has an average multiple of 5.9, Kunming 6.6, while the two leading cities of China’s Red Basin, Chongqing and Chengdu, were somewhat higher (7.1 and 7.4).

Comparison to Other Demographia Cities

Yet the multiples for many Chinese cities are no worse than highly unaffordable cities in Australia, New Zealand, Canada, the United States, and the United Kingdom.

A sampling of cities from China and the Demographia Survey is illustrated in Figure 2. 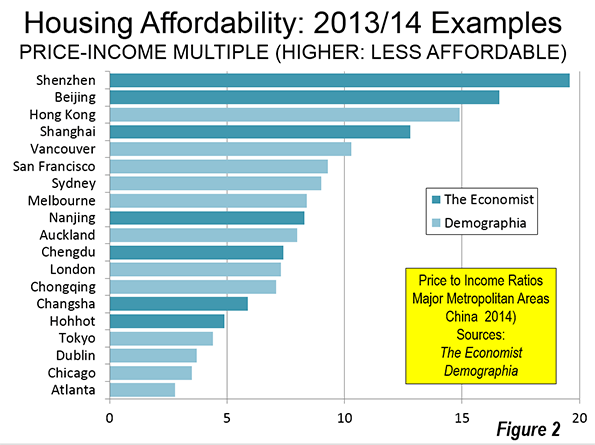 Toward an Affordable China

One of rapidly urbanizing China’s biggest challenges is to improve housing affordability. This is an imperative, with easing of the hukou internal resident permit system and the one-child policy. United Nations projections indicate that China’s urban areas will add another third to their population in the next 25 years, an increase of more than 250 million. China is better housed today than perhaps at any time in its history. But it needs to be still better housed, as internal migrants become permanent urban residents and as rural citizens move to the cities for better lives.

What About Those Trump Tapes? Much Ado About Nothing

Why Countries Must Pay Their Debts

Osama vs. Obama: Some Thoughts on the 70th Anniversary of D-Day

Certificate of Need Law in Need of Reform