Life is Good in St. Louis

The headline line in the Sunday St. Louis Post-Dispatch asked “Are St. Louis Area’s Home Prices too Low?” This is could not possibly have appeared describing any major metropolitan area of Australia, New Zealand, or the United Kingdom. Nor will newspapers in Vancouver, Toronto, Calgary, Portland, Seattle, Boston, New York or in any of the overpriced markets of California decry low prices any time soon.

The March 8, 2015 article by Jim Gallagher rightly noted that house prices tended to be higher in cities outside St. Louis, there are “restrictions on building, either geographical or political.” Gallagher quotes William Rogers, an economist at the University of Missouri- St. Louis says that “Developers have really serious problems putting up houses in Los Angeles or San Francisco.”

The 11th Annual Demographia International Housing Affordability Survey, produced with Hugh Pavletich of Performance Urban Planning in Christchurch New Zealand,  confirms the low house prices in St. Louis. In 2014, the median multiple, a price to income ratio calculated by dividing the median house price by the median household income, was 2.7 in the St. Louis metropolitan area. St. Louis is tied for fifth most affordable middle-income housing market among the 86 major metropolitan area markets (over 1,000,000 population) in nine nations.

Yet, somehow the city of St. Louis has avoided the financial train wreck of Detroit, nor do planners suggest the next industry should be urban agriculture. At a minimum, the difference suggests that St. Louis, even as it has lost population, has been much better led than the Motor City. Further, the much larger St. Louis metropolitan area (which is the area described in the Gallagher article and rated in the Demographia Survey) is anything but depressed.

Gallagher indicates that “lots of people here could pay more for houses, but they don’t have to.” That is correct. However, households in St. Louis pay approximately the same percentage of their income to buy houses today that most people have since World War II. That is also the same amount that Angelos and San Franciscans paid until the coming of excessive regulation (see Fischel) in the 1970s; since then  house prices there have increased between 2.5 and 3 times. 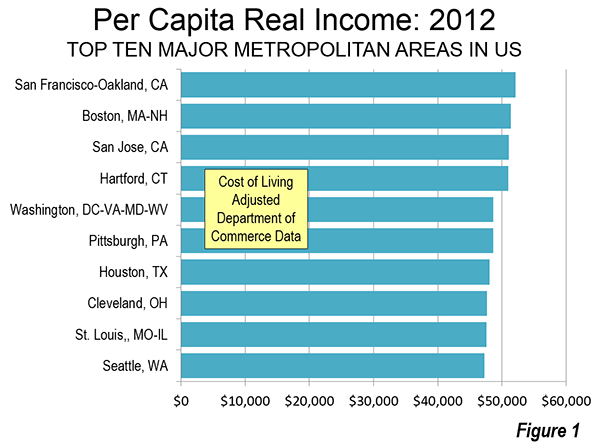 The metropolitan areas ranked above St. Louis are the usual suspects of nominal affluence. No one would be surprised that San Francisco has the highest incomes, both nominal and adjusted for cost-of-living. San Francisco’s nearly 50% advantage in nominal personal income over St. Louis drops to less than 10% when the cost of living is considered. Given the graduated nature of the federal income tax, the difference could be less. The other most affluent cities are Boston, San Jose, Hartford, and Washington. The cost of living conversion factor (regional price parity) is more than 25% in San Francisco, San Jose and Washington and 18% in Boston. Only in Hartford, among the leaders, has anything similar to a normal cost of living (6% above the national average)

There are other surprises in the top 10. Both Pittsburgh and Cleveland have higher cost of living adjusted incomes than St. Louis. Less surprising is that Houston is in the top 10, given its robust economy, at least before oil prices dropped.

There are some interesting omissions from the top 10. Global city New York ranks 17th, just behind “Music City” Nashville. Portland, America’s incubator of house price increasing planning policies, finds itself ranked 39th. Even in Jackson, Mississippi, not large enough to make the over 1,000,000 list, has higher real per capita income than Portland.. Perhaps the biggest surprise is Los Angeles. Like New York, often considered a Global City, the city of my birth is anything but Global City real per capita incomes. Even depressed Detroit (though the suburbs of Detroit are anything but depressed) is ranked 10 positions above Los Angeles and has real per capita income 10% higher.

All of this should be regarded as good news for St. Louis. Once, to be sure, St. Louis was far more important. As late as 1910, St. Louis was the fourth largest municipality in the United States, trailing only New York, Chicago and Philadelphia. While St. Louis is not depressed, it has grown much more slowly than most metropolitan areas. But the decline has been more in the urban core city than the surrounding areas. Over the past the past 60 years the city of St. Louis lost more than 500,000 residents, while between 1950 and 2010, while the suburbs added 1,400,000.

Gallagher indicates that construction prices are reasonable in St. Louis. In fact they are not much less than in the stratospheric housing markets of San Francisco and Los Angeles. For example, a 2,500 square foot starter house in the East Bay of San Francisco would cost less than 10 percent more to build than in St. Louis, according to data at building-cost.net.The difference between housing costs in St. Louis and high-cost market is in the land, which is where the cost of excess regulation shows up

As a metropolitan area, St. Louis has competitive difficulties (see: Shrinking City, Flourishing Region: St. Louis Region). The weather is not as nice as in California. The winters are tougher than in Texas or Florida. But the one great advantage St. Louis possesses is reasonable middle income housing affordability. This is an important competitive advantage that led to only modest domestic migration losses during the 2000, when high priced Los Angeles and New York were bleeding more than 1.3 million net domestic out migrants.

Also, with the money they don’t have to pay for over-priced housing, St. Louisans can buy more “stuff” or take longer vacations. Nor do St. Louisans get less for their less money. The median sized detached house is the same in St. Louis (1,800 square feet) as in  San Francisco and slightly larger than in Los Angeles (1,744 square feet), according to the American Housing Survey in 2012, yet St. Louisans pay much less.

The bottom line is that for all of the competitive difficulties, life is good in St. Louis. And, one big reason is housing prices middle-income households can afford.

Am I an ‘Enemy of the People’?

In The Tank (ep98) – “Net Neutrality” is BAD, and Repeal and Replace of Obamacare Flounders