Transit ridership is increasing in the United States. The American Public Transportation Association (APTA)has reported that 10.8 billion trips were taken on transit in 2014, the largest number since 1956. With a more than 80% increase in gasoline prices since 2004, higher transit ridership was to be expected. However, it would be wrong to suggest the transit ridership is anywhere near its historic peak, nor that the increases have been broadly spread around the nation.

Total transit ridership in 2014 was the highest since 1956. That’s just the beginning. The 2014 modern record ridership was lower than every year from 1956 all the way back to at least 1912, the last year of William Howard Taft’s presidency, when transit carried 13.2 billion riders.

Transit ridership has virtually collapsed since that time in relative terms. In 1912, the average man, woman and child rode transit at least 170 times a year. Today, the figure is about 35, down 80% from 1912. During the intervening century, non-farm employment increased by more than five times and the urban population, transit’s principal market, also increased more than five times. Ridership was elevated to its peak by gasoline rationing during World War II. Before that, transit ridership had peaked in 1926, as car ownership and suburbs rose before the Great Depression.

The Continuing Dominance of New York

Further, contrary to some media accounts, recent transit increases have not really been national in scope. Nearly all of it was on transit systems that serve local mobility in the City of New York as well as the rail systems serving the City from the suburbs. In the City, most of the service is provided by the Transit Authority. Additional services are provided by the New York City Department of Transportation and the Staten Island Railway. The suburban rail systems are the Long Island Railroad, the Metro North Railroad, New Jersey Transit Rail and PATH Rail. On these systems, nearly 90% of national work trip travel was to the city of New York and nearly three-quarters of those were to Manhattan.

Overall, the enormous system of buses and subways of New York City alone accounted for 88 percent of the national ridership increase from 2013 to 2014. If the ridership on the four large suburban rail systems that serve New York City (the Long Island Railroad, the Metro-North Railroad, New Jersey transit commuter rail, and the PATH trains) is added, City related transit accounts for 94 percent of the increase. A great achievement for the City, but not one that is being repeated in the rest of the nation.

This is nothing new. National transit ridership has increased about 10 percent over the decade since 2004. Much of the increase — 79 percent — has been on New York City’s buses and subways. The suburban rail systems raise that total to 84 percent. This does not include the many commuter buses that enter the city especially from New Jersey and other suburbs, which cannot extracted from the data because it is not separately reported (Figure). 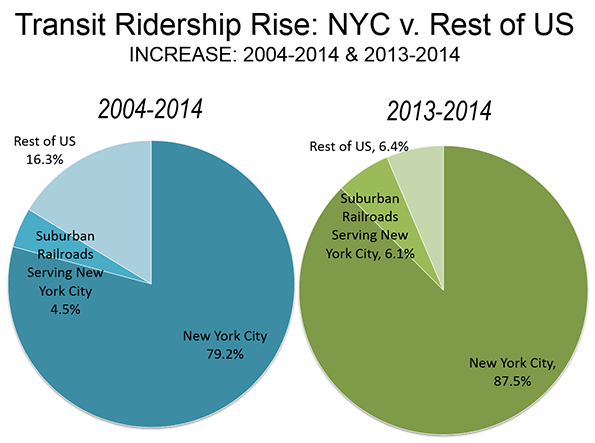 New York’s transit turnaround has been nothing short of impressive. Nearly all of the nation’s progress in transit has been on a bus and subway system that carries one third of the national rides.

The results have not been nearly so positive in the rest of urban America, where 30 times as many people live. While New York City related transit services experienced a ridership increase of 33% in the last decade, in the rest of the nation, the increase was less than three percent. Even huge ridership increases in New York City cannot make much of a difference nationally. In 2004, transit accounted for approximately 1.6% of urban travel. By 2014, it had risen to only 1.7%. Without taking anything from New York City’s impressive transit record, these results are not likely to be replicated elsewhere. New York City is a very unique place. It is home to the world’s second largest business district, after Tokyo, the area south of Central Park in Manhattan. Approximately 2 million peoplework in this small area, a number approximately four times the next largest central business districts, in Chicago and Washington.

Approximately three quarters of Manhattan employees reach work by transit. This is 15 times the national average, New York City’s population density (excluding Staten Island, with its postwar suburbanization) is by far the highest and most extensive in the nation. The city of San Francisco comes the closest to New York City, with little more than half the population density and only 1/10 the total population.

Transit is often suggested as a substitute for the car. The reality is that transit can compete with the car only to the largest downtowns. Destinations within the six transit “legacy cities,” (not metropolitan areas) of New York, Chicago, Philadelphia, San Francisco, Boston, and Washington account for most of the nation’s transit work trips. And, 60% of these trips are to downtown.

Transit cannot compete elsewhere, because travel times tend to be double those of the automobile (according to the American Community Survey) and it provides little practical access to most jobs.  University of Minnesota research indicates the average employee can reach fewer than 10 percent of jobs in less than one hour by transit in 46 major metropolitan areas. By contrast, approximately 65% of people who drive reach their jobs in less than 30 minutesby car in the major metropolitan areas. Building new rail systems doesn’t change the equation. At least 20 new urban rail systems have been built in the last four decades, though transit’s percentage of work trips has generally not improved, despite representations about reducing traffic congestion to the contrary. For example, in Portland, Washington, Los Angeles, Dallas-Fort Worth, and Atlanta, which have among the most extensive new rail systems, a smaller percentage of commuters use transit than before rail opened, when there were only buses.

Even low income workers, who are often portrayed as “transit dependent,” use cars much more than transit, and at a rate nearly equal to that of others in the labor force.

Yet, transit funding advocates continue to seek even more money, claiming that transit can attract drivers from their cars and reduce traffic congestion. That may be true in New York City’s uniquely transit-friendly environment, but not elsewhere.

Death by a Thousand Cuts Must Not Triumph

Did We Give Informed Consent?