Top Posts
A Vision for Tobacco Policy; 2020 Edition
The Super Bowl Proves that America Is Not...
Prosperity and Inequality
Heartland Weekly – Canceling Student Debt Would Be...
Independence Day in Britain!
Miss Virginia Makes the Grade
The Thunberg Fallacies
Dr. Richard Keen, R.I.P.
Government Spending Gets Even More Out of Control
Polar Bears: The End of a Climate Delusion...
Home Featured The Evolving Urban Form: Sprawling Boston

Few terms are more misunderstood than “urban sprawl.” Generally, it refers to the spatial expansion (dispersion) of cities and has been use to describe urbanization from the most dense (least sprawling) in the world (Dhaka, Bangladesh), the most dense in the United States (Los Angeles) and also the least dense in the world (such as Atlanta and Charlotte, low density world champions in their population categories).

The discussion of density and dispersion is often confused, a prisoner of pre-conceived notions about various urban areas.  Boston is in a class by itself in this regard. Boston certainly deserves its reputation for a high density urban core and a strong CBD. Yet, Boston itself represents only a small part of the urbanization in its commute shed, which is a combined statistical area (CSA) or stand-alone metropolitan area (Note 2). The CSA is the largest labor market definition and combines adjacent metropolitan areas with strong commuting ties. The city of Boston had only 8% of the Boston-Worcester-Providence CSA population in 2010.

Much of the Boston CSA is made up of extensive, low density suburbanization more akin to Atlanta or Charlotte than to Los Angeles, which has the densest suburbs.

In contrast to its reputation for compactness, the Boston CSA is massive in its geography, covering more than 9,700 square miles (25,000 square kilometers). It is larger than Slovenia or Israel. The CSA stretches across parts of four states, including the eastern half of Massachusetts, all of Rhode Island, a large southeastern corner of New Hampshire and the northeastern corner of Connecticut. It includes the Boston, Providence, Worcester, Manchester and Barnstable Town metropolitan areas and the Concord (NH) and Laconia (NH) micropolitan areas.

The Boston CSA also includes multiple CBDs, from the fifth largest in the nation, Boston, to much smaller, but historically significant Providence, Worcester, and Manchester.

Urbanization in the Boston CSA

But perhaps the most remarkable feature of this “Greater Greater Boston” is the extent of its urbanization (Note 3). The urban areas within the Boston CSA cover 3,640 square miles (9,400 square kilometers). This includes the dominant urban area of Boston (4.2 million), Providence (1.1 million), Worcester (0.5 million), which have largely grown together and a number of other urban areas. The urbanization is illustrated in the photograph above, which superimposes a Census Bureau maps of Boston’s urbanization and the Boston CSA, both on a Google Earth image. The CSA is a “reddish” color, while the urban areas are more “pinkish,” and completely enclosed in the CSA. 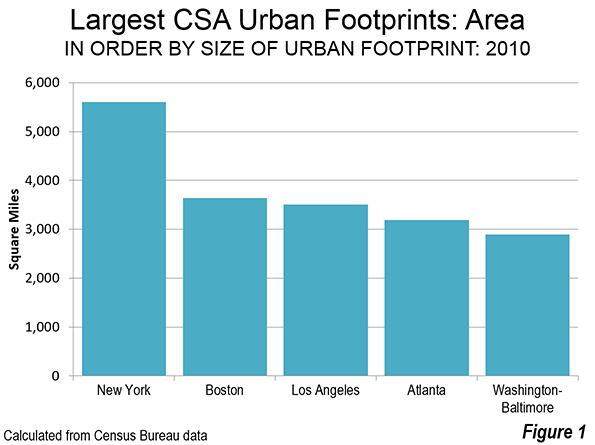 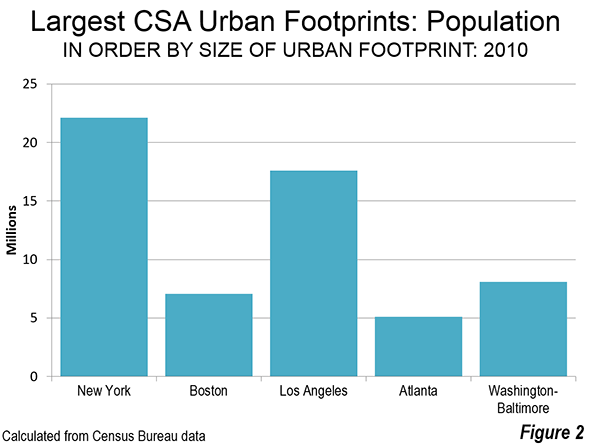 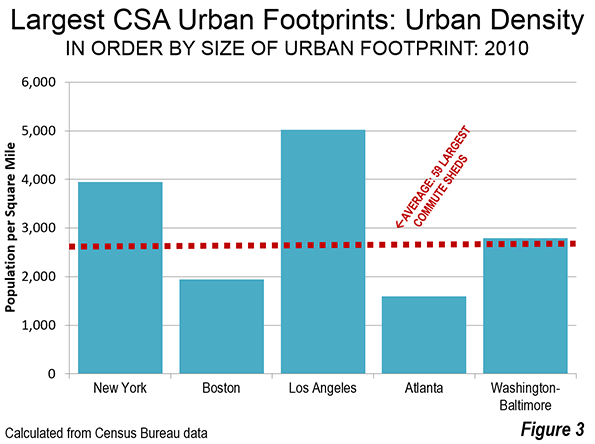 But once you get outside of 128, Boston’s urban population density fall steeply. If the denser urbanization inside Route 128 and the historic, dense municipalities of Providence, Worcester and Manchester are excluded, the remainder of Boston’s urbanization has a population density of 1,435 per square mile (550 per square kilometer). This is less dense than Atlanta’s urbanization outside the city of Atlanta. Overall, the Atlanta urban area is the least dense in the world with more than 2.5 million population. Approximately two-thirds of the Boston CSA urban population lives in these sparsely settled suburbs (Figure 4). 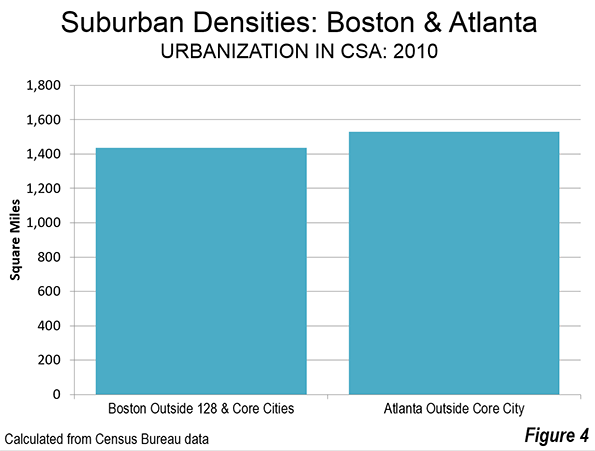 If the Boston CSA were as dense as  the Los Angeles urban form, the population would be 18.3 million, not 7.1 million, more than 2.5 times as -people as now reside there.

In many ways, Boston is the epitome of the dispersed urban development that followed World War II. Once one of the nation’s densest urban areas, it has evolved into one of the least. What distinguishes Boston from other low density urban areas, like Atlanta, Charlotte or Birmingham (Alabama) is that is core well reflects the urban form built for the pre-automobile age.

As would be expected, Boston’s highly dispersed urbanization has been accompanied by highly dispersed employment. Despite having the fifth largest CBD in the nation, Boston’s “hub” accounts for only 6% of the CSA employment. In the 1950s and 1960s, Route 128 became the nation’s first high-tech corridor and has been referred to as the birthplace of the modern industrial park. But most people work outside 128.

Despite Boston’s huge urban expanse the average trip travel time is only 29 minutes. This is slightly above the US average of 26 minutes and 18 minutes shorter than Hong Kong, the high-income world’s densest urban area. Hong Kong’s urban density is more than 30 times that of Boston’s urbanization.

One of the World’s Most Prosperous Metropolitan Areas

Highly dispersed Boston has emerged as one of the world’s most affluent areas. According to the Brookings Global Metro Monitor, the Boston metropolitan area has the fourth largest GDP per capita, purchasing power parity, in the world. Boston trailed only Macau, nearby Hartford and San Jose, the world’s leading technology hub. Two other Boston CSA metropolitan areas were successful enough to be included in the top 100 in the Brookings data. The Providence and Worcester metropolitan areas ranked in the top 100 (like 65 other US metropolitan areas), at about the same level as Vienna, while leading Brussels and Tokyo. Overall, Boston has to rank as one of the country’s – and the world’s most successful labor markets. It has done so while not being denser but while combining the virtues of both a successful core city and a large, expansive periphery.

Note 1: Cites have two generic forms, physical and economic (or functional). The physical form is the continuously built-up area, called the urban area or the urban agglomerations. This is the area that would be outlined by the lights of the city from a high flying airplane at night. The economic form is the labor market (metropolitan area or combined statistical area), which includes the urban area but stretches to include rural areas and other areas from which commuters are drawn. There is considerable confusion about urban terms, especially when applied to municipalities when called “cities,” Municipalities are not themselves generic cities, but are usually parts of generic cities. Some municipalities may be larger than their corresponding generic cities (principally in China).

He is co-author of the “Demographia International Housing Affordability Survey” and author of “Demographia World Urban Areas” and “War on the Dream: How Anti-Sprawl Policy Threatens the Quality of Life.” He was appointed to three terms on the Los Angeles County Transportation Commission, where he served with the leading city and county leadership as the only non-elected member. He served as a visiting professor at theConservatoire National des Arts et Metiers,a national university in Paris.

Take a Bow for the New Revolution

Happy 25th Birthday to the Contract with America!

Radical Environmentalists Are the Real Science-Haters

More on Why Preschool Vouchers Are a Bad Idea