Top Posts
On the Death of Justice Ruth Bader Ginsburg
Newsom vows to fast track toward Germany’s failed...
The War against ‘Unbridled Capitalism’
Real Climate Science from David Legates Seems to...
Separating Fact From Fiction About Wildfires
America’s Fiscal Follies are Dangerously in the Red
Biden’s anti-energy plan would devastate Pennsylvania and boost...
The GND Would Ground Air Force One
Are Democrats Trying to Spark a Violent Revolution—or...
Finally, States Are Retracting Hydroxychloroquine Bans
Home Featured Poorer Nations Set for 99% of Population Growth

According to the new United Nations World Population Prospects: The 2015 Revision, the population of the world is projected to rise from 7.3 billion in 2015 to 11.2 billion in 2100. This represents a 53 percent increase. However, over the period, population growth will moderate substantially. This is indicated by the annual growth rate the first year (2015 to 2016), at 1.1 percent, compared to the last year (2099 to 2100) at 0.1 percent. Annual population growth is projected to decline 90 percent from the beginning of the period to the end (Figure 1). 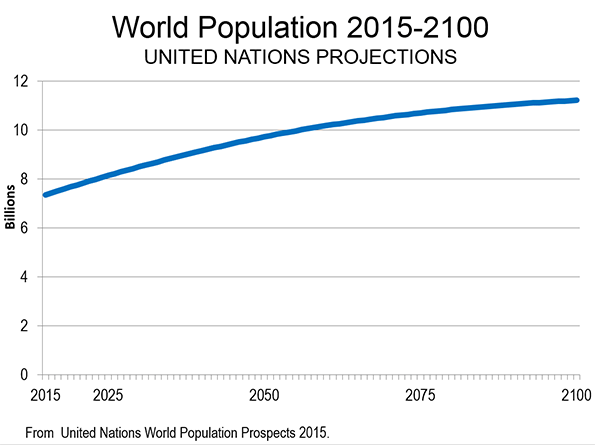 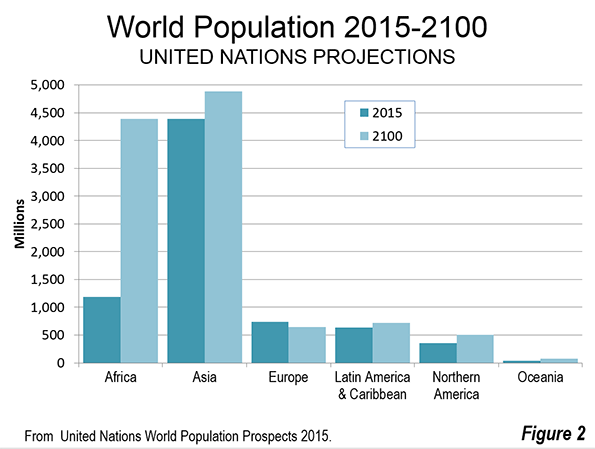 The world’s high income nations are expected to add only eight percent (111 million) to their population and will represent only three percent of the population growth. These nations are principally in North America and Europe, but also include Japan, South Korea, Saudi Arabia and others.

The world’s upper middle income nations are expected to experience a population decline of three percent, which amounts to a loss of 82 million residents. China, Russia, Mexico, South Africa, Iran and Brazil are examples of upper-middle income nations. When combined with the high income gain noted above the more affluent half of the world’s nations would add 29 million residents, or just 0.7 percent of the world’s growth. This is fewer people than live in the Tokyo metropolitan area.

In the high income and upper middle income regions, population growth will be also anything but consistent. Nations such as the United States, the United Kingdom, France, Canada and Australia are expected to grow far faster. The United States is expected to add 40 percent to its population and more than four times the population growth of all of the upper half of nations. Canada (up 39 percent) and Australia (up 77 percent), combined, are expected to add more population than the total upper income half of nations.  These gains will be largely offset by losses in Japan, Germany, South Korea, Italy and others. 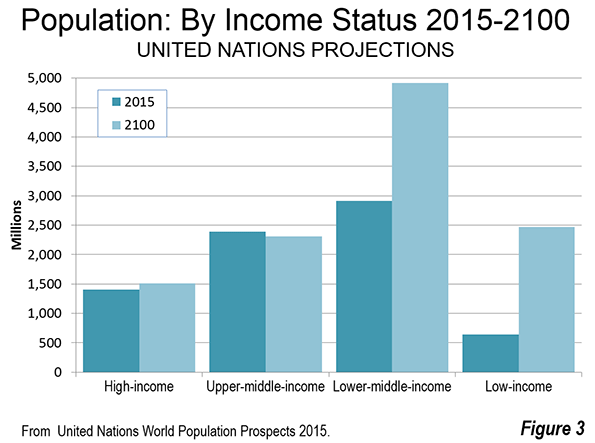 By 2100, there are expected to be substantial changes to the top 10 nations in population. Five of the 10 largest nations in the world are expected to be in Africa. This is an increase from one in 2015 (Figure 5). Nigeria will have replaced the United States as the third largest nation, with approximately 750 million people, having more than quadrupled in size. The Democratic Republic of the Congo (Congo – Kinshasa) would ranked fifth, and is expected to reach 390 million people, quintupling in size. Tanzania would ranked eighth, reaching 300 million residents, nearly 6 times its 2015 population. Ethiopia would have more than 240 million residents, 2.5 times its current population and would rank ninth. The 10th largest nation would be Niger, with 210 million residents, a figure 10 times its 2015 level. Among the African nations in the top 10, only Ethiopia would be declining by 2100, having reached its population peak in 2097. 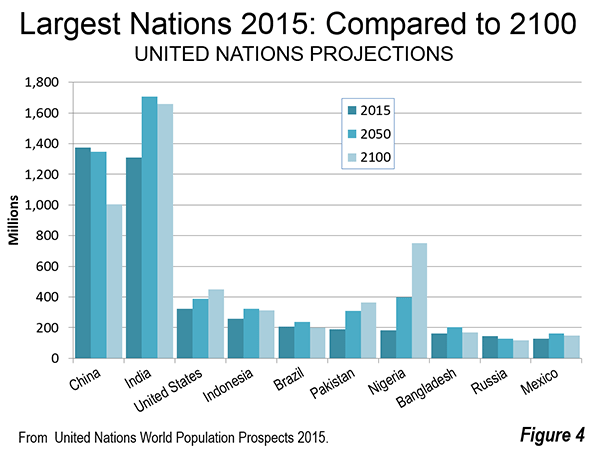 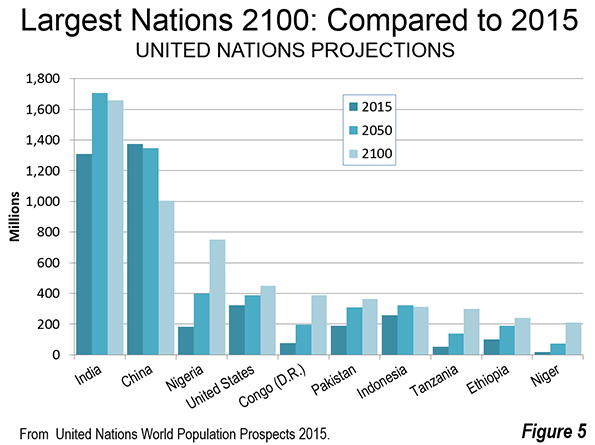 The Uncertainty of Projections

Of course projections of any kind are subject to wide error ranges. Economic growth, the extent of poverty, wars, social trends, medical advances and other factors can interfere. The simple fact is that none of us and no organization knows the future for sure. One study of UN population trends in six Southeast Asian nations found that 1980 projections from 1950 were 13.9 percent off by nation, with a range from minus 20 percent to plus 27 percent. There had been some improvement in comparing 1975 projections to 2000 actual populations, with an average error of 8.2 percent. The range was little improved, from minus 23 percent to plus 25 percent. Obviously projections are likely to be much more accurate in early years and the chances for greater accuracy are improved in larger nations or regions.

A World of Challenges

Regardless of the extent of accuracy, which cannot be known at this point, the projections indicate a continuation of trends that cause concern. A world that is experiencing virtually 100 percent of its growth in its poorest areas cannot help but face a tougher future. This makes it clear that the principal priority of governments around the world should be to improve affluence and reduce poverty. The challenges are gargantuan, but focusing on these issues is likely to result in a better, though less than ideal, world.

Hell to the Redskins

Common Sense: An Immodest Proposal for Funding the Government