Follow Me
Elizebeth Yore
Policy Advisor at The Heartland Institute
Elizabeth Yore was a member of the Heartland Institute Delegation that travelled to the Vatican in April 2015 to urge Pope Francis to re-examine his reliance on UN population control proponents who support climate change.

Follow Me
Latest posts by Elizebeth Yore (see all)

The Pope of Dialogue has thus far slammed the bronze doors of St. Peter’s on any dialogue on the issue of global warming. (Many Catholics argue that everything else is up for dialogue with this Pope, though).

Despite his incessant rantings about the need to dialogue, climate change is off limits. In the words of his global warming maestro, Bishop Sanchez Sorondo, climate change is elevated to “magisterium,” deserving of an apostolic exhortation and papal endorsement of the globalists’ precious Paris Climate Treaty. Francis joined the globalist cop-out chorus of the “science is settled.” His global warming architect, Bishop Sorondo scolds the global warming doubters “saying that we need to rely on coal and oil is like saying that the earth is not round. It is an absurdity dictated by the need to make money.” Sorondo also repeats the lame classic globalist slam that the deniers are funded by the oil industry.

Wake up, there is simply no dialogue with this Vatican on any issue, not endorsed by the United Nations’ globalists and its bureaucrats.

In April 2015, the Heartland Institute, a free-market think tank located in Chicago, which refutes the political agenda of human-caused global warming, sent a delegation of experts to the Vatican to try to present the Pope with the other more scientific view on climate change. As a member of that delegation,  I saw first hand and learned that this Pope had no interest in dialoguing about man caused global warming. Francis and his Vatican had no time for the highly credentialed Heartland experts, who ranged from NASA scientists who put men on the moon to MIT scientists, climatologists and global climate science experts.

Nevertheless, Francis chose not to dialogue.

After all, Francis would rather listen to a globalist political hack, like UN Secretary General Ban Ki Moon. Despite his pontificating about the importance of dialogue, the pontiff’s mind was already decided having listened to population control/global warming proponents, as non scientist Jeffrey Sachs, non scientist Naomi Klein and Hans “the population of the world should be only 1 billion people” Schellnhuber, to name just a few.  Creepily, the Vatican dialogue doors were only open to population control greenies.

One of the Heartland Delegation members, E. Calvin Beisner, founder of the Cornwall Alliance for the Stewardship of Creation also launched an Open Letter to Pope Francis endorsed by over 100 scientists and theologians. The Letter urged the Pope that climate change models “provide no rational basis to forecast dangerous human-induced global warming, and therefore no rational basis for efforts to reduce warming by restricting the use of fossil fuels or any other means.”

A few months later, along came his rambling eco encyclical, Laudato Si, which called Catholics to a new environmental conversion and environmental spiritualism. The 191 page apostolic exhortation included a collective mish-mash of new age sentimentality, polluted with an anti capitalism rant, and faux Ehrlichian predictive catastrophes (LS#24). Francis managed to sink to an all-time theological low by calling for the reduction of air conditioners in a papal encyclical. (LS#55) You just can’t make this stuff up!

Since the 2015 Heartland Delegation, the Pope has gone on his merry way issuing his Laudato Si, speaking at the UN in support of the UN Sustainable Development Goals, and the ParisClimate Treaty. Francis and Barack Obama hugged the same global warming tree and to the Pope’s delight Obama signed the Paris Climate Treaty.

Along comes out of the deep blue sky, Donald Trump who doesn’t share the Pope’s view on climate change and nullifies the Paris Climate Change Treaty obligations of the U.S.

The Pope is not pleased that his newly fashioned moral doctrine of man caused global warming is not shared by the most powerful man in the world. In fact, Francis seems downright irritated that his best laid plans hatched with the elite Population Control elites at the UN were stymied by this upstart global warming sceptic, Donald Trump.

Francis is turning up his rhetorical heat about the climate deniers, using hardly papal persuasion or propriety. In his most recent infamously morally treacherous 30,000 feet airplane press conferences, the Pope sounding like Paul Ehrlich, the disproved Population Bomb predictor:

“To the North Pole, you could go. It’s very, very clear. When that news came from a university, I don’t remember from where, another came out that said, ‘We only have three years to turn back, otherwise the consequences will be terrible.’ I don’t know if three years is true or not, but if we don’t turn back we’re going down, that’s true.”

Unfortunately for the Pope, the Heartland Institute is persistent and fearless about defending the truth and still wants to engage the Pope in a dialogue about the science of global warming. The Heartland Institute’s new President Tim Huelskamp, former Congressman from Kansas, is not one to shy away from a controversial issue. Tim is used to battling for conservative causes in Congress, so he does not take lightly the scathing papal attack on scientists who doubt man caused global warming.  Huelskamp, a faithful Catholic immediately responded on twitter to the papal comments: 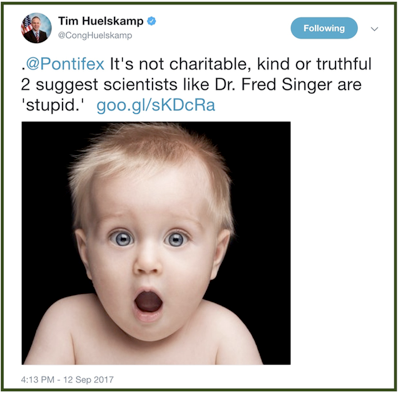 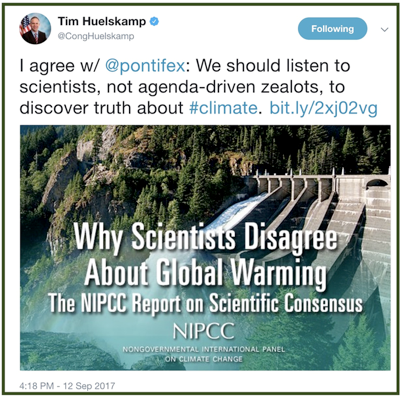 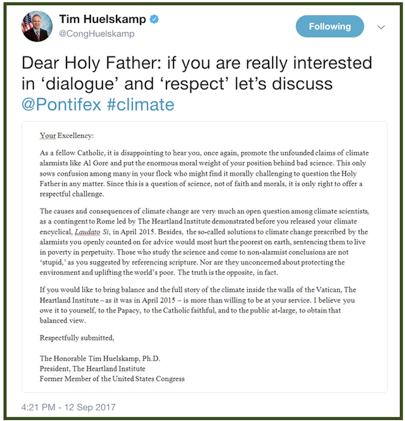 Francis no longer enjoys a climate change free ride with Donald Trump in the White House and Tim Huelskamp at the Heartland Institute.  Tim wisely decided to challenge the Pope’s unrelenting boast to “dialogue.”  In a most powerful and persuasive request to the Pope, Huelskamp writes to Francis:

“As a fellow Catholic, it is disappointing to hear you, once again promote the unfounded claims of climate alarmists, like Al Gore and put the enormous moral weight of your position behind bad science. This only sows confusion among many in your flock who might find it morally challenging to question the Holy Father in any matter. Since this is a question of science, not faith and morals, it is only right to offer a respectful challenge.”

Don’t hold your breath for an answer. Francis will respond to your offer to dialogue, as he did to the Dubia with utter silence and disdain.

Finally, Francis mused on the plane press conference about how history will judge the science of climate change:

I would say: everyone has their own moral responsibility, first. Second, if one is a bit doubtful that this is not so true, let them ask the scientists. They are very clear. They are not opinions on the air, they are very clear. And then let them decide, and history will judge their decisions.”

Of this, Francis is correct. History and God will judge his decisions. In the meantime, do yourself a favor and learn from some real scientists about the truth of climate change:

Convention of States: How the States Meet to Bypass Congress

Biden Administration to ‘Transform’ US Food System – ‘Fundamentally’ We Imagine

Colorado Supreme Court Embraces the Rule of Law, not the Fear Mongering of the Anti-Fossil-Fuel Movement

In The Tank (ep63) – How Will a Trump Presidency Affect Energy, Health Care, and Education Policy?