Two states and more than 80 cities and counties have now announced a goal of receiving 100 percent of their electricity from renewable sources. Wind, solar, and biofuels are proposed to replace electricity from coal, natural gas, and nuclear power plants. But evidence is mounting that 100 percent renewables is poor policy for US households and businesses.

Some cites already claim to get all power from renewables, generally by using a little electricity “sleight of hand.” Rock Port, Missouri claims to be the first US community powered by wind because it has a local wind farm. But when the wind doesn’t blow, Rock Port gets power from other generators in Missouri, a state that gets 77 percent of its electricity from coal and 97 percent from non-renewables in total.

It’s not going to be easy. It will not be immediate. But it must be done…California is committed to doing whatever is necessary to meet the existential threat of climate change.

But cities and states pursuing 100 percent renewable electricity lay the foundation for a future painful lesson. Households and businesses will experience the shock of rapidly rising electricity prices as more renewables are added to the system.

Wind and solar cannot replace output from traditional coal, natural gas, and nuclear power plants, despite claims to the contrary. Wind and solar are intermittent generators. Wind output varies dramatically from high output to zero, depending upon weather conditions. Solar output is available for only about six hours each day when the sun is overhead and disappears completely on cloudy days or after a snowfall. Hydropower is a renewable source that can replace traditional power plants, but even this source is insufficient in years of drought or low snow runoff.

Experience shows that utilities can only count on about 10 percent of the nameplate capacity of a wind or solar facility as an addition to power system capacity. For example, on December 7, 2011, the day of peak winter electricity demand in the United Kingdom, the output of more than 3,000 wind turbines in the UK was less than five percent of rated output. The UK House of Lords recognized the problem a decade ago, stating “The intermittent nature of wind turbines…means they can replace only a little of the capacity of fossil fuel and nuclear power plants if security of supply is to be maintained.” 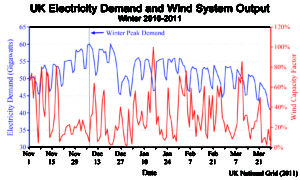 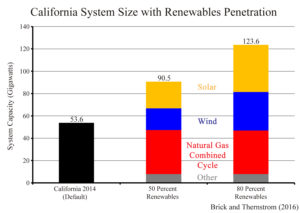 From 2008 to 2017, California power rates rose 25 percent compared to the US national average increase of about 7 percent. But the worst is yet to come. As California adds renewable capacity to approach 100 percent renewables, generated cost of electricity will likely triple.

Green energy advocates recognize renewable intermittency and hope that advances in battery technology will save the day. Large-scale commercial batteries, they claim, will be able to store power during high levels of renewable output and then deliver power to the grid when wind and solar output is low.

But batteries are not the answer because of the large seasonal variation in renewable output. For example, wind and solar output in California in December and January is less than half of the output in summer months. Commercial large-scale batteries available today are rated to deliver stored electricity for only two hours or ten hours duration. No batteries exist that can store energy in the summer and then deliver it during the winter when renewable output is very low. 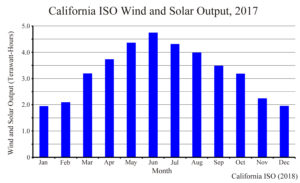 Real Threats To Planet And People

Dark Clouds on the Horizon for Electric Vehicles

Cold Outbreaks Are Not Caused by Global Warming

Heartland Daily Podcast – Jackie Stewart: The Harmful and Unrealistic Goals of “Keep It In The Ground”

Climate Science is NOT Settled