Cherish Them From Afar

Greg Walcher
Greg Walcher is one of the most recognized and respected national leaders in natural resources policy. He is founder and president of the Natural Resources Group, a nationwide ad-hoc coalition of consultants with natural resources expertise. He is also a partner in the global public affairs firm, The Stillwell Group, a senior advisor to the respected environmental permitting firm of Dawson and Associates, and a senior fellow at the American Tradition Institute. Walcher served in the cabinet of the governor of Colorado, leading the state's Department of Natural Resources, a department of 2,500 employees, eight divisions, 14 boards and commissions, and a $180 million budget. Walcher and his wife Diana own an orchard of 4,000 peach trees, and operated a direct marketing and fresh fruit shipping business with customers in over 40 states. Their operation was featured in "Gourmet Magazine" as a cutting-edge example of niche marketing and high quality.

Bayard Taylor wrote, “And far and wide, in a scarlet tide, the poppy’s bonfire spread.” He could have been describing the famous poppy fields in Lake Elsinore, California. They cover the hillsides so colorfully that they are a popular destination for picnickers and shutterbugs. 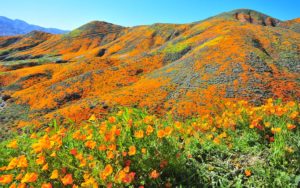 They also provide a seasonal economic boom for the town, but officials there decided there were just too many people enjoying the fields of reddish-orange. So they closed access during the most intense blooming season. It reminds me of the National Park Service’s reaction to the popularity of DC’s famous cherry blossoms every year – they close the parking lots and restrict access to the sidewalks.

Poppies have long symbolized nature’s ability to produce great beauty from tiny seeds, representing for many people the renewal that is central to all life. Remember John McCrae’s famous poem once memorized in schools, “In Flanders fields the poppies blow, between the crosses, row on row…”

As you can imagine, thousands of people were disappointed by the closure in Lake Elsinore, which points to a great irony in natural resources policy. That is, we kill off the traditional industries that supported western towns, replacing them with the tourism that beautiful places attract when promoted. Then decide we’re loving these places to death, so they must be closed to tourists, too.

There are places where tourism is so out of control that people are in danger of destroying the attraction itself. The Inca Trail at Machu Picchu, for example, brings over 5000 people a day traipsing over the ruins, and the once idyllic beaches of Bali are now garbage dumps, choked with chain hotels, shopping malls, traffic jams, and pollution.

A few of America’s national parks have tremendous growing pains. Though overall visitation has declined in recent years, the numbers are increasing in a few parks. Zion visitors, for example, doubled in the last 20 years, to over 4.5 million last year. Traffic jams are more frequent nowadays in Great Smokey Mountains and Arches National Parks, but have been routine in Yellowstone since the 1950’s.

Government officials are convinced they must act. Crowds require “crowd control,” after all, and that’s what governments do. The National Park Service has proposed timed entry tickets, trying to spread out the visitors. They have done that for several years at the Washington Monument and Statue of Liberty, and it doesn’t work. It does not reduce the number of people who come to see these places, just adds to the frustration and anger level. The result is that once there, people stay longer. Though overall visitor numbers declined in 2017, average time spent in the national parks increased by 19 million hours over 2016.

How will western communities stabilized and grow their economies if visitors are to be limited? Most cities and towns in the west were founded and thrived on the essential industries of logging, mining, ranching, and energy production. Somewhere along the way, the environmental industry decided those must be stopped. In a clever semantic twist, they were dubbed “extractive industries.” It sounds noble to produce food, energy, and resources needed for a prosperous society. But “extraction” sounds like pure evil – like pulling a tooth from Mother Nature. A majority of Americans who live in urban cities, not involved in those businesses, have become convinced, supporting a range of policies constricting grazing, mining, oil and gas production, and logging.

Western communities that object have been called myopic, lectured that their lifestyles are “unsustainable,” and assured that tourism would fill the gap. In fact, the “green” jobs created by preserving and protecting the “last great places” would be better. Tourists come in droves to see pristine woods, not logged forests, we were told. And the price of stopping active forest management has been over 100 million acres of national forests burned in the last 20 years.

Yet when the crowds of tourists come, bringing all that money with them, creating clogged hotels, restaurants, and roads, the same environmental industry reacts by demanding that we close these great places to tourists. If nothing else, the contradiction reveals the true agenda of people who just don’t like people. There are just too many, they think.

But if we block tourism, too, who will enjoy the poppies? When Moina Michael started the fashion of wearing red poppies to honor World War I veterans, she wrote, “We cherish too, the Poppy red, that grows on fields where valor led…” You can still cherish them, just do it from afar – no actual visiting.

The Dangers of the New Democratic Socialism

Would Revived Civics End Up Being Progressive Ed Redux?

‘Loss of Place’ is Legitimate, Fear of Frac Sand is Not

Trump’s Exit From Climate Accord Puts America First, For a Change

Blame Government, Not the Market, For Dwindling Coal Industry