Government Subsidies and the Decline of Higher Ed: Lessons from Australia

Darren Brady Nelson
Policy Advisor at The Heartland Institute
Darren Brady Nelson is an Austrian School economist who has worked for free-market think tanks and advised politicians in Australia and the United States.

The Productivity Commission (PC) of the Australian federal government has produced a number of reports in recent (and past) years on higher education. These well-researched and well-resourced studies provide an ideal foundation for exploring and explaining the history of, issues in and likely drivers for the “Disaster Down Under” … with possible lessons for the USA.

The most recent PC study on higher education was entitled The Demand Driven University System – A Mixed Report Card (2019). This importantly includes sub-chapter 1.2 on The Evolution of Australian Higher Education Policy. As the figure below shows, the current system was largely shaped in four major policy phases; five if one were to add in the end of the fourth phase since 2017. 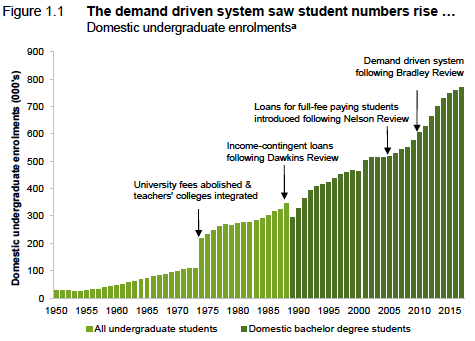 The PC explained the precursor to the first phase as: “In the 1950s and 1960s, the ability to pay tuition fees up front (often by students’ parents) was a large part of the rationing mechanism.” The term “rationing” is used in it’s broadest meaning – i.e., any economic good is scarce and thus needs be allocated in some way such as through competitive market prices. The PC then noted that in phase one: “Tuition fees were abolished in 1974 and by the mid-1980s student demand far outpaced the supply of places.” And that: “Rising school completion rates and an increase in the number of 17-19 year olds intensified pressure on the system.”

“These pressures led to sweeping reforms, guided by the Dawkins Review (1987).” This was phase two. The PC went on: “To balance the fiscal burden of growing student numbers while maintaining access, Dawkins recommended introducing the Higher Education Contribution Scheme (HECS), an income-contingent government loan at a concessional interest rate.” Furthermore: “Following the Dawkins reforms, the total number of government-supported places grew at a rate determined by the Australian Government, with quotas allocated to each university [and they] received capped funding amounts according to the quotas.”

In phase three: “The Nelson Review (2002) gave prominence to greater access to university, including an emphasis on an expansion of full-fee-paying places.” The PC added: “Following the review, the Australian Government made loans available to full-fee-paying students and allowed universities to enrol larger numbers of them, while also raising the contributions paid by government-supported students.”

As for phase four: “The Bradley Review contended that non-government funding sources (including full-fee-paying students) were inadequate to maintain a quality system and meet projected shortages of university-educated people.” The PC also wrote: “The Review’s most important recommendation was to uncap the number of government-supported places to increase total student numbers and support greater equity of access.” And that: “The largest additional program was the Higher Education Participation and Partnerships Program (HEPPP) [which] provide[d] universities an incentive to enrol more…students.” Thus: “[U]niversity access expand[ed] substantially.”

A broader study of Australia was undertaken by the PC entitled Shifting The Dial – 5 Year Productivity Review (2017). It included sub-chapter 3.5 on Improving University Outcomes as well as supporting paper 7 on University Education which both highlighted a number of significant issues, likely drivers and possible solutions.

The PC assessed that “student outcomes are often poor” or in other words that: “Although measuring the quality of university teaching is difficult, several indicators, when considered together, point to significant room for improvements.” One of these indicators was student satisfaction, which the PC put under the “microscope” to find: “Substantial shares are not satisfied with key aspects of their university experience.”

But ‘talk is cheap’; and surveys are even cheaper. The PC also looked at jobs and found: “The full-time employment rate among recent university graduates has been consistently falling for several decades, and therefore cannot be ascribed to cyclical downturns such as the [global financial crisis].” See below. 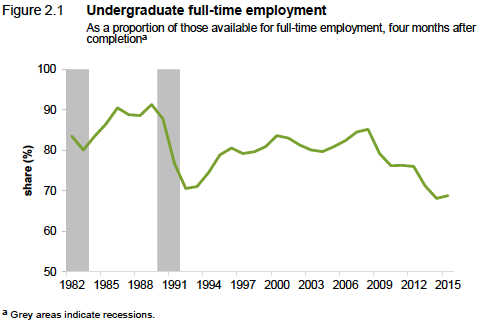 The PC not only found lessening jobs for university grads but lessening money too: “For those graduates who do get a full-time job, initial earnings have also grown modestly in recent years, with some evidence that graduate starting salaries have not increased as fast as wages elsewhere in the economy.” See below. 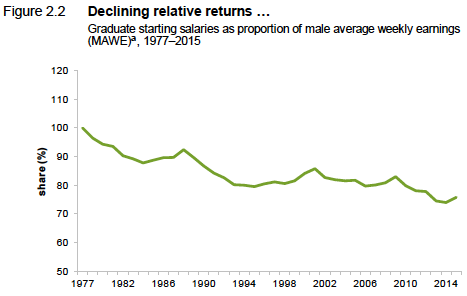 The PC suggested in Shifting The Dial that the “elephant in the room” is as follows: “The architecture and conduct of the university system is heavily influenced by the Australian Government’s suite of regulatory and funding arrangements.” In particular: “The Government provides considerable direct funding to the sector, as well as substantial financial support to almost all domestic students through direct subsidies, caps on tuition fees and subsidised income-contingent loans.” As the figure below shows, most disciplines are directly and heavily subsidised (in blue); and what remains (in green) is often debt, which is also significantly subsidised. 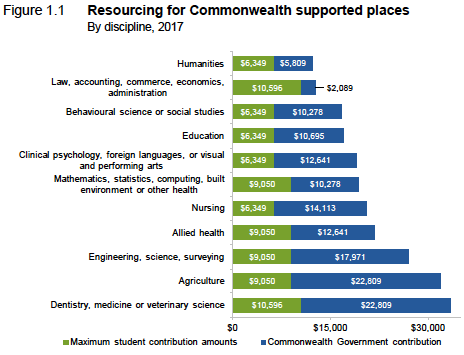 Further regarding debt, the PC noted: “Although payment of fees upfront is an option, nearly 90 per cent of students pay their tuition fees and student contributions through the Higher Education Loan Program (HELP).” HELP was originally called HECS. The PC describes HELP as: “Income-contingent loans with an interest rate linked to inflation (that is, the Australian Government does not apply any real interest to a student’s borrowings).” As the figure below shows, student debt has grown arithmetically; but is projected to take-off geometrically. 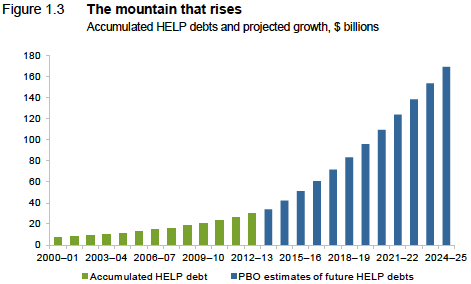 The PC investigated the “teaching-research nexus” finding that this is “not only historical, but [is] also a regulatory requirement” as well as “universities do not always undertake both with the same enthusiasm and energy.” The PC also discovered that “universities use the portion of teaching revenues that is in excess of the actual cost to educate the student (the ‘teaching surplus’) to cross-subsidise their research functions”. The result is “cross-subsidies can create incentive structures that undermine student outcomes and university teaching quality” and “to churn out domestic and international students undertaking high-margin courses”.

Taxpayer subsidies are the main theme. Subsidies are the direct drivers for universities and their students, but also the indirect ones for them through supporting loans and cross-subsidies. These incentivise poor outcomes of dissatisfaction, underemployment and insufficiency. The history shows up-and-down waves of introducing massive subsidies and trying to rein these in. This is not surprising given Murray Rothbard’s economic and political analyses in Power and Market – Government and the Economy (1977): “All cases of subsidy coercively penalize the efficient for the benefit of the inefficient.” And worse still: “Caste conflict is thereby created, for one man benefits at the expense of another.”

The PC highlighted in Shifting The Dial that “poor incentives create poor outcomes” because “universities, much like other economic agents, respond to the incentives that they face”. Moreover: “This includes not just financial incentives (such as those created by the Government-controlled subsidies, funding and student contribution caps), but also the institutional and regulatory incentives (particularly ‘market’ design issues and regulatory controls imposed by the Government, which can limit competition between providers).”

The answer according to the PC? “Introducing skin in the game”. However the PC’s suggested solutions are not this at all, but just a series of tweaks to laws and loans. To paraphrase the 1992 presidential campaign of Bill Clinton: “It is the subsidies, stupid!” As George Leef wrote in Can American Higher Education Be Restored? (2019): “Federal higher education subsidies [are] the root of our numerous maladies.” The problem is the same in Australia as it is in America. So to is the solution. Free markets, not “free” education.

[Originally Published at The Mises Institute]

We Need to Celebrate Human Achievement Day, Now More than Ever

Summer Is the Perfect Time to Practice Parent-Centered Education