But the study, Effects of Residential Gas Appliances on Indoor and Outdoor Air Quality and Public Health in California, lacks accuracy and perspective. Natural gas is a low-cost, nonpolluting fuel for heating, cooking, industrial use and generating electricity.

In the case of indoor pollution, stoves are the only appliances that may be a concern for California because state law requires furnaces, water heaters and other gas appliances to vent exhaust to outside air.

The UCLA study claims gas appliances cause harmful indoor pollution, but does not develop any new data. Instead, the study uses models and hypothetical cooking scenarios to claim, “Concentrations of carbon monoxide and nitrogen dioxide during cooking events can exceed levels set by national and California-based ambient air quality standards.”

Carbon monoxide and NO2, if breathed in high concentrations, can be hazardous to health. However, the model results of CO from gas stoves summarized in the study do not find levels exceed either California or U.S. Environmental Protection Agency standards. Modern gas stoves, when professionally installed and maintained, do not pose a carbon monoxide risk for today’s homes.

Nitrogen is not part of natural gas fuel, but NO2 can be created by stove burner flames, which break down nitrogen in the air. The UCLA models project that if a stove and oven were used simultaneously for two hours of cooking, indoor NO2 levels could reach 34 parts per billion, exceeding the California Ambient Air Quality Standard of 30 ppb.

But it isn’t clear that NO2 concentrations of 34 ppb are hazardous to health. EPA’s National Ambient Air Quality Standard for NO2 is 53 ppb. About NO2 levels below 50 ppb, EPA says, “No health impacts are expected for air quality in this range.”

In addition, the studies cited by the UCLA paper did not find evidence that NO2 emissions from gas stoves were unhealthy. For example, UCLA cites Dales (2008), which states, “Whether chronic exposure to low concentrations of nitrogen dioxide from indoor sources increases the risk of respiratory illnesses is unclear.”

Contrary to claims by the UCLA study, residents should have confidence that modern gas stoves do not pose an indoor air pollution health risk.

Nevertheless, the UCLA paper urges eliminating all California gas stoves based on only questionable model projections for nitrogen dioxide with no evidence on carbon monoxide or other indoor pollutants, and with only inconclusive support from the scientific literature.

The second part of the UCLA paper claims that gas appliances generate harmful PM 2.5 particle pollution. It contends that if California residential appliances are transitioned to electric, the reduction in PM 2.5 emissions will result in 354 fewer deaths and reduce health costs by $3.5 billion each year.

The EPA classifies PM 2.5 as particles smaller than 2.5 microns in diameter, which is smaller than the eye can see. For several years, EPA has warned that inhaling small particles is associated with premature death. The agency warns that death may occur within a few hours of inhaling PM 2.5, or may be caused by long-term inhalation over decades. 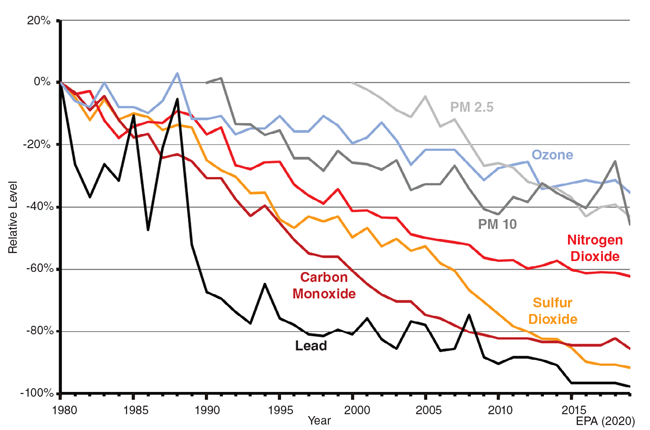 These improvements in air quality have been achieved with U.S. residents using more than 50% more natural gas today than in 1980.

PM 2.5 pollution typically is below the EPA national standard of 12 micrograms per cubic meter, and is down 43% since 2000.

Twelve micrograms per cubic meter is not very much. Dr. James Enstrom, a retired researcher from the UCLA School of Public Health, points out that a person breathing in 12 micrograms of small particles per cubic meter of air would inhale less than 5 grams, or less than one teaspoon full, of these microscopic particles over an 80-year life span. The EPA’s assertion that this tiny dose of particles causes premature death is not credible.

How do the EPA, the California Air Resources Board, and other organizations conclude that thousands of Americans die prematurely each year from particle pollution? No coroner ever attributes a cause of death to small particles. Instead, the EPA relies on epidemiological observational studies that find statistical associations between particle pollution and death.

Epidemiological studies look for associations between exposure to an agent and appearance of disease in a population. An example is the Doll and Hill study in the 1950s that found cigarette smoking caused lung cancer in a population of 41,000 British medical doctors. The EPA has concluded that associations found in epidemiological studies show that inhaling small particles causes premature death.

In comparison, the Doll and Hill study found smokers had 10 times the rate of lung cancer of nonsmokers, a relative risk of RR=10. The weak association (small relative risk) between death and particle pollution that the EPA judges to be causal could be the result of other factors in measured populations, or even random chance.

Other studies have found no causal association between small particle pollution and death. For example, Cox (2017) analyzed small particles and death of persons 75 years or older in Boston and Los Angeles during periods from 2007 to 2013. That study found that ambient PM 2.5 concentrations did not predict average elderly mortality rates in either Boston or Los Angeles.

The underlying data from the Harvard Six Cities study and the American Cancer Society study have never been released. As a result, other scientists are not able to replicate and verify their results.

The EPA has released a supplemental notice of proposed rule making titled, “Strengthening Transparency in Regulatory Science.” This proposed rule is a follow-on effort to a 2018 NPRM intended to base regulatory policy on scientific studies that release their underlying data for re-analysis and critique. This certainly is needed in the case of epidemiological studies claiming associations between low levels of particle pollution and death.

The UCLA paper projects that if gas appliances are replaced by electric appliances in California buildings, outdoor levels of PM 2.5 will be reduced by 0.11 micrograms per cubic meter. But airborne particulate pollution is dominated by other sources of particles.

On Jan. 1, 2018, California legalized the recreational use of marijuana. A person who smokes a single marijuana joint or a single tobacco cigarette inhales more particles than one would inhale from breathing a year’s worth of particles in California air. In only two days, the 2017 Napa Valley fire produced an estimated 10,000 tons of PM 2.5, which is the amount emitted by California’s 35 million vehicles in a year.

Eliminating gas appliances from 13 million residences would reduce California outdoor airborne particle pollution by less than 1%. Such a small change in air quality could not be detected by any measurement system.

It appears the real goal of the UCLA paper is to support climate change policies with arguments about projected improvements in air quality and illusory health benefits. The paper describes natural gas as primarily methane, “a potent greenhouse gas,” and contends “buildings are responsible for an estimated 25% of GHG emissions in California.”

But California gas appliances are an insignificant part of world energy usage, comprising only 0.33% of world natural gas consumption. If all California residential appliances were converted from gas to electric, the effect on global gas usage and global GHG emissions would be negligible.

But the biggest advantage of gas appliances is lower cost of operation. Think Energy reports homeowners can save $1,000-$2,000 annually with a gas furnace compared with an electric furnace. Water heater savings can be $200 annually, and dryer and stove savings each can be $100 annually, when using gas instead of electric.

On Sept. 10, 2018, then California Governor Jerry Brown signed SB 100, mandating that the state obtain 100% of its electricity from “clean energy sources” by 2045. But wind and solar cannot replace traditional coal, natural gas and nuclear power plants if continuity in the electric supply is to be maintained. Wind and solar are intermittent generators. Wind output varies greatly from high to zero, depending on weather conditions.

Solar output is available only about six hours each day when the sun is overhead, and disappears completely on cloudy days or after a snowfall. Hydro power can replace traditional plant output, but even this source is insufficient in years of low snow runoff or drought.

Because of intermittency, utilities can count on only about 10% of the nameplate capacity of a wind or solar facility. For example, wind output for the state of Texas in March 2014 varied from more than 8,000 megawatts to less than 500 megawatts in a few hours.

Green energy advocates recognize renewable intermittency and propose grid-scale batteries to solve the problem. They claim large-scale commercial batteries will be able to store power during high levels of renewable output and then deliver that power to the grid when wind and solar output is low.

But batteries are not a sufficient answer because of the large seasonal variation in renewable output. Wind and solar output in California in December and January is less than half that of summer output. Today’s commercial batteries are rated to deliver stored electricity for only 2-10 hours. No batteries exist that can store electricity in the summer and then deliver it in the winter when renewable output is very low.

Californians will experience the shock of rapidly rising electricity prices as more renewable energy is added to the power system.

To try to achieve the “deep decarbonization” required by SB 100, California will need to keep 90% of traditional power plants as backup while adding increasing amounts of wind and solar. Traditional power plants will be run inefficiently at low utilization with priority given to renewables. Total system capacity must double and triple as 100% renewable output is approached.

As a result of rising system capacity, Brick and Thernstrom concluded that, to achieve 50% renewable penetration, wholesale electricity prices would need to rise from 5.2 cents a kilowatt-hour to 9.6 cents/kW-hr. For 80% renewable penetration, prices would have to rise to 14 cents/kW-hr, a near tripling of wholesale electricity prices. 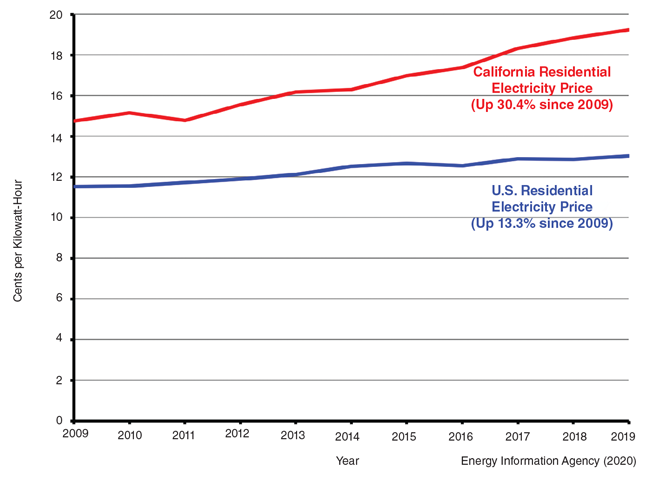 Yet, more than 30 cities covering almost 10% of California’s population now prohibit gas appliances in new housing. The elimination of gas appliances and rising electricity prices will cause a painful reduction in Californians’ standard of living, particularly in low-income households.

Jim Nathanson, executive director for The Empowerment Alliance, says, “The UCLA study is a disservice to the hardworking people who are trying to make ends meet during these tough times. Low cost, abundant, domestic natural gas not only helps American families stretch their household budgets when it comes to more efficient appliances, but creates American jobs and bolsters national security.”

Removing gas from California homes, or any other state in the union, will not measurably improve either indoor or outdoor air quality. Nor will it measurably reduce global warming. But residents will lose the flexibility, efficiency and low-cost operation of gas appliances. In addition, homeowners will be exposed to the full measure of rising state electricity prices. California residents should reject bans on gas appliances.

Churchill: Americans Do Right Thing (After Exhausting Every Other Possibility)