Follow me
Kevin Mooney
Writer at The Daily Signal
Kevin currently writes for National Review, The Daily Signal, The Epoch Times, The Washington Examiner, Broad & Liberty, and the publications of the Capital Research Center.

Follow me
Latest posts by Kevin Mooney (see all)

Wheeler, speaking at the Richard Nixon Presidential Library and Museum in Yorba Linda, California, drew a sharp contrast between the Trump administration’s environmental achievements and the “poor choices” made by some policymakers at the state level.

“But for environmental policy to work nationally, the federal government and states must work together as partners, not as adversaries,” the Environmental Protection Agency administrator added.

How are socialists deluding a whole generation? Learn more now >>

New England states now must import natural gas from Russia, Wheeler said, because Cuomo has stood in the way of pipelines that could have transported gas supplies from Pennsylvania.

The EPA chief also called attention to “rolling blackouts” in California and the public policy hostile to natural gas power plants that he said led to those blackouts.

President Richard Nixon created the Environmental Protection Agency in 1970 and the agency officially will celebrate its 50th anniversary later this year.

Wheeler, who became acting EPA administrator in November 2018 after the resignation of Scott Pruitt, won Senate confirmation to the post in February 2019.

In his speech at the Nixon Library, Wheeler stressed the need for cooperation between the federal government and state governments rather than animosity.

“To do this involves a new vision,” he said, “and for a country searching for a new consensus on the environment as well as on many other things, this can seem tough. But I believe we can find a new consensus, if we strive to.”

Wheeler highlighted several areas where he said the Trump administration had made significant environmental progress that  largely went unheralded in the media.

“During the first three years of the Trump administration, air pollution in this country fell 7%,” he said. “Last year, EPA delisted 27 Superfund sites, the most in a single year since 2001. And agency programs have contributed more than $40 billion dollars to clean water infrastructure investment during President Trump’s first term.”

But  the EPA administrator also lamented the emergence of “single issue advocacy,” often focused on climate change, that has disrupted a broad, bipartisan consensus on environmental policy in line with Nixon’s vision that made legislation such as the Clear Air Act and Clean Water Act possible:

Unfortunately, in the past decade or so, some members of former administrations and progressives in Congress have elevated single issue advocacy—in many cases focused just on climate change—to virtue-signal to foreign capitals, over the interests of communities within their own country. Communities deserve better than this, but in the recent past, EPA has forgotten important parts of its mission. It’s my belief that we misdirect a lot of resources that could be better used to help communities across this country.

Wheeler also said that climate change policies pursued at the state level often are detrimental to the environment and the economy.

Although Cuomo has moved to block pipelines that would transport natural gas from Pennsylvania to New York and New England “in the name of climate change,” Wheeler told his audience, the carbon footprint of natural gas pipelines is much smaller than what it takes to transport gas supplies across the ocean from Russia and other parts of Europe.

The environmental problems with Cuomo’s anti-pipeline stance don’t end there, he said.

“These poor choices subject Americans to imports of gas from places like Russia, even in the face of evidence that U.S. natural gas has a much cleaner emissions profile than imported gas from Europe,” Wheeler said.

And in the absence of pipelines, citizens in Vermont, New Hampshire, and Maine must “use more polluting wood and heating oil to heat their homes because of gas shortages in the winter months, which in turn creates very poor local air quality,” he said.

It should go without saying that dumping sewage into San Francisco Bay without disinfection, indeed without any chemical or biological treatment, is a bad idea, but that’s what’s been happening for many years, against federal law. And just last month, the rolling blackouts created by California’s latest electricity crisis—the result of policies against power plants being fueled by natural gas—spilled 50,000 gallons of raw sewage into the Oakland Estuary when back-up wastewater pumps failed.

Wheeler expressed concern that “environmental accidents will happen more often” if state policymakers persist in pushing “more renewables onto the grid at times of the day when renewables aren’t available.”

Looking ahead, Wheeler said the Trump administration intends to focus on “community-driven environmentalism” that promotes revitalization efforts, “meeting the 21st-century demands for water,” “reimagining the Superfund program as a project-oriented program,” “reforming the permitting process to empower states,” and “creating a holistic pesticide program for the future.”

The Superfund program dates to 1980, when Congress passed the Comprehensive Environmental Response, Compensation and Liability Act. The law provided funds for cleaning up thousands of sites across the country laced with contaminants such as lead, asbestos, and dioxin-infused soil as well as radiation.

Superfund sites include “manufacturing facilities, processing plants, landfills and mining sites,” according to the EPA website.

During his speech, Wheeler said about 16% of the U.S. population, or slightly more than 50 million Americans, lives within 3 miles of a Superfund site.

Although in the past the EPA “allowed litigation and bureaucracy to dictate the pace of Superfund projects, instead of focusing on improving environmental indicators and moving sites to completion,” Wheeler said, he sees an opportunity to “reimagine” the program by implementing the recommendations of the 2018 Superfund Task Force.

1. “Cost-benefit rulemaking” that determines how costs and benefits of proposed rules are calculated.

“The American public deserves to know what the costs and the benefits are for each of our rules,” Wheeler said. “We are starting with the Clean Air Act, which will provide much better clarity to local communities, industry, and stakeholders. And we will implement a cost-benefit regulation for all our environmental statutes by 2022.”

2. “Science transparency” to bring “much-needed sunlight” to the regulatory process.

“The American public has a right to know the scientific justification behind a regulation,” Wheeler said. “Some people oppose it, calling it a Secret Science rule. Those who oppose it want regulatory decisions to be made behind closed doors. … I want to bring our environmental decision-making process out of the proverbial smoke-filled back room.”

3. “Guidance documents” accessible to the public in a searchable database.

5.  A management system that tracks “real metrics” to measure successes and failures within the agency.

Kevin Dayaratna, a research fellow and principal statistician at The Heritage Foundation, said he is particularly impressed with Wheeler’s efforts to tighten the rules that govern how the agency conducts cost-benefit analysis.

Dayaratna also credited the EPA administrator with advancing the cause of scientific transparency.

“It is terrific to hear Secretary Wheeler considering explicit requirements for the EPA to engage in cost-benefit analysis of rules that the EPA may consider pursuing,” Dayaratna said, adding:

In the past, we have repeatedly heard rhetoric about catastrophic outcomes regarding climate change only to find out that the policies intended to avert such changes will come with tremendous costs and virtually no environmental impact whatsoever.  We have repeatedly emphasized in our research at Heritage that lawmakers and rulemakers should engage in cost-benefit analysis of policies they are pursuing.

I am thrilled to hear that the EPA is pushing for further transparency.  Several years ago, I found a mistake in one of the EPA’s climate economics models, which would not have been possible had the models not been made publicly available. …

Sadly, however, there are many other models used to guide climate policy that are still essentially black boxes.  It will be terrific if the EPA can require those models to be made publicly available as well, so the public can also test their robustness and legitimacy.

Going forward, Wheeler said, the federal government and states should collaborate rather than operate as adversaries. He expressed some confidence that policymakers can reach a new consensus on environmental questions.

“We are a nation made up of communities, and communities are the foundation of this nation, not the other way around,” the EPA chief said. “If we can do the work before us—break down the silos between us as an agency and elsewhere—I believe we can both protect the places we love and bring back the places that have been hurt by pollution and make them even better than they were before.”

Wheeler’s complete remarks may be viewed here on YouTube.

A Note for our Readers: 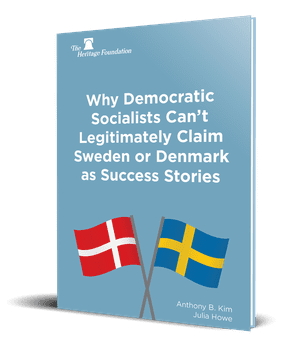 Democratic Socialists say, “America should be more like socialist countries such as Sweden and Denmark.” And millions of young people believe them…

For years, “Democratic Socialists” have been growing a crop of followers that include students and young professionals. America’s future will be in their hands.

How are socialists deluding a whole generation? One of their most effective arguments is that “democratic socialism” is working in Scandinavian countries like Sweden and Norway. They claim these countries are “proof” that socialism will work for America. But they’re wrong. And it’s easy to explain why.

Our friends at The Heritage Foundation just published a new guide that provides three irrefutable facts that debunks these myths. For a limited time, they’re offering it to readers of The Daily Signal for free.

Get your free copy of “Why Democratic Socialists Can’t Legitimately Claim Sweden and Denmark as Success Stories” today and equip yourself with the facts you need to debunk these myths once and for all.

[Originally posted on The Daily Signal]

GOP Needs To Stop Feeding The Hands That Bite Them