Shortages and Inflation to be the New Norm...
Leading the Green Lemmings
Net-zero Reality Check #1 – Wind Only
Coal-Fired Dragon Ignores Climate Zealots
Indian Coal Makes Electricity as Wind Farms Sit...
Some Seniors Are Being Shortchanged by Social Security...
Can We Soon Expect Food Shortages?
Biden and the ESG Community mandating reductions in...
The Centenary of Ludwig von Mises’s Critique of...
Biden and His Democrats’ Solar Sell-Out to Communist...
Home Climate Change A Climate-Change Warrior’s Last Word

Jane Shaw
Higher Education Editor at School Reform News
Jane Shaw Stroup (who also writes under the name Jane S. Shaw) is chair of the James G. Martin Center for Academic Renewal. She was president of the center (then called the Pope Center for Higher Education Policy) from 2008 until 2015, when she retired.

Fred Singer, a battle-seasoned warrior of the climate science debates, died last year at the age of 95. The third edition of his highly readable and scientifically sound book, Hot Talk, Cold Science, has just been published, by the Independent Institute. David R. Legates and Anthony R. Lupo are coauthors who also wrote an afterword.

On a hot day in June 1988 James Hansen told a congressional committee that he was “99 percent sure” that the global warming signal had arrived. From then on, the nation has been embroiled in the climate-change issue, with multiple forecasts, apocalyptic claims, international summits, protocols, and agreements. If you are curious about both the political storms and the actual science of global warming, you will love this book.

Singer’s book gives you all—a chronological account of the political debate; a serious discussion (with charts and graphs) of the science; and a plain-spoken analysis of both. 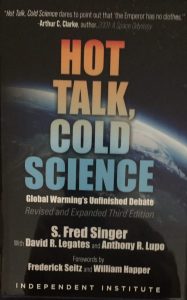 If you wonder, for example,  why the Kyoto Protocol was abandoned in favor of the Paris Agreement, you can learn about it here from one who was a bold participant in the debates.

But first, let me share a little about Fred Singer. His career included a wide variety of scientific academic positions—at the University of Maryland, Miami University, and the University of Virginia, as well as high-level government scientific research, working with the Office of Naval Research, the National Weather Center, the Department of Transportation, the Environmental Protection Agency, and the Department of the Interior.

Singer received his Ph.D. in physics from Princeton in 1948, with a dissertation on cosmic rays. Thus, it is not surprising that some of his most heralded work occurred in in 1950s, when space research was in its early stages. He received two special commendations from President Eisenhower, one for working with the Navy to launch satellites from airplanes (1954) and the other more generally for his work on satellites (1958). He was a Distinguished Alumnus of Ohio University, where he studied as an undergraduate, and in 1959 he was named by the Junior Chamber of Commerce as one of the ten outstanding men in the country.

Singer had two outstanding qualities as a scientist: he was both an imaginative innovator and a skeptical analyst. After 1988, he began to question the growing fears of global warming. As Joseph Bast of the Heartland Institute wrote in tribute:

“Fred Singer’s contribution to the international debate over climate change cannot be overstated. He was a pioneer, one of the first and most prominent scientists to debate his fellow scientists and criticize the false and exaggerated claims of environmentalists and politicians who claimed to be experts on the subject. Where others stayed silent out of fear of retaliation by activists in government and in universities, Fred was utterly fearless, willing to take the slings and arrows of critics in order to defend real (not political) science.”

The surprising thing about Hot Talk, Cold Science is that is easy to read and never boring, even though Singer included very detailed charts and graphs whose details are of greatest interest to the scientifically trained. It is easy to get the gist of them and to keep reading. Furthermore, almost anyplace that you dip into the book brings up something intriguing.

Roughly, the book is divided into “Hot Talk”—a reference to the political debates—and “Cold Science”—discussions of what is actually known about the science. But in fact, there’s politics and science intermingled throughout the book. Here are a couple of many highlights:

There has been no warming trend since 1998. In spite of continuing claims that “this is the hottest year ever,” when it comes to the most reliable source of world temperatures—satellite data—there has been little or no warming for the past 20 years. Yet carbon dioxide emissions continue to go up. This unexpected combination of temperature “pause” (a widely used term) and continuing increases in CO2 has puzzled climate scientists. Writes Singer:

“There have been many attempts to explain this discrepancy, ranging from a flat denial that such a gap exists . . . to attempts to account for the ‘missing incoming energy.’” (p. 121)

Singer offers some possible explanations, but the major takeaway is that the General Circulation Models (GCMs) that supposedly forecast the amount of warming “cannot, and should not, be used to predict the future climate or as a basis for policy decisions” (p.  121).

Sea level is not rising any faster due to warming temperatures. Yes, sea level is rising gradually, as it has been since the peak of the last Ice Age 18,000 years ago, says Singer. Local areas of faster sea-level rise do occur, but they reflect the areas’ different rates of  “tectonic shift or subsidence.” Tidal measurements in “tectonically  stable areas” show a “steady linear sea level rise of about 18 cm per century” (p. 117).

To confirm that warmer temperatures are not causing the sea level to rise faster, Singer looked at the period of 1915 to 1945 because for that period there is clear evidence that temperatures rose. But the warming did not accelerate sea level rise, he said, citing (and illustrating) records of sea-level rise in coastal areas around three large cities.

Singer’s book ends with a twist, typical of this analytical, observant, and creative mind: Perhaps we should be more worried about future cooling than warming—possibly a Little Ice Age like the one the world experienced, with great hardship, from 1400 to 1850. And Singer offers some ways of dealing with it if it happens.

Overall, an excellent farewell from a key figure in the climate change debates.

Warren’s Plans Have One Thing in Common: More Government Control

Progressivism Is An Imposter

Is the End of Mask Mandates on Planes Like the Fall of the Berlin Wall? Not Really … but Kinda