written by Joe Bastardi May 25, 2021
Joe Bastardi
Chief forecaster at WeatherBELL Analytics
Joe Bastardi is chief forecaster at WeatherBELL Analytics, a meteorological consulting firm. His reputation for making bold and accurate forecasts has landed him on major television programs including Fox News Live, ABC World News, The O’Reilly Factor, The Colbert Report, CBS’ The Early Show, Imus in the Morning, and several others. Additionally, Mr. Bastardi is well known for his blog featuring the popular videos “The Atmospheric Avenger” and “The Raging Weatherbull.”'
Latest posts by Joe Bastardi (see all)

Since May 12, I have been touting sudden summer developing across areas of the US that have been very cold this May. Lo and Behold it happens, and when it does, here is what we get.

NO PERSPECTIVE AT ALL TO WHAT WAS FORECASTED AND WHAT MAY HAS ACTUALLY BEEN LIKE!

So lets give some Perspective to this. The heat is not going to hold. There is a reversal back to much cooler coming so much so it may snow in the northern plains Thursday night into Friday:

and I don’t think anyone is going to be complaining about it being too hot this weekend in large areas of the nation. In fact in the NE corridor there is going to be wailing and gnashing of teeth that a large part of the first “summer” weekend of the season is anything but that.

Of course, since it is going to get hot in the west so the Weaponizers will head west next week to report on how hot it is getting in the west, ignoring the compensating cool.

The new dust bowl that was supposed to occur after we had the 3 dry years 2010-2012, that was touted loudly by these very same people, still shows no signs of occurring. May has been a very wet month centered over Texas

In fact since the dust bowl hysteria, our growing seasons have looked like this: Yet if its dry in one place in one season, its weaponized. BTW look at California. Been near average (remember average and normal are NOT the same thing. It is “normal” for the weather to swing back and forth and that makes up the average. The fact it any given day is as or more likely to be above or below the average than at the average! That is a normal occurrence). Maybe a lot of the problem in California is due to a much larger population than back in the 50s and 60s. More demand but average overall rain, what do you think is going to happen? Yet all we here is drought drought drought or too much rain. Funny the Song. “Seems it Never Rains in Southern California” was written in 1970. How did some song writer pick up on the fact California is a dry climate overall if this is such a climate change driven event? Of course, weaponizers point at the heavy rains that show up at times too. But then again the songs last line of the chorus:

It never rains in California
But girls don’t they warn ya
It pours, man, it pours

BTW want to see what a dustbowl looks like ( I am addressing my friends on the other side of the issue so when they make that forecast again, and they will, they know what they are up against. And they should let us know how this could have happened with co2 so low.) 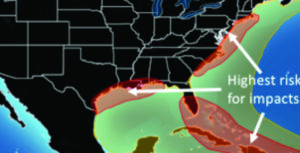 Here is what happened: Here are the NOAA warnings: 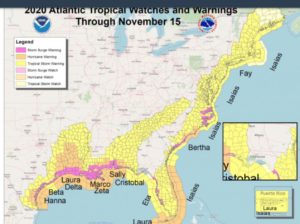 My point, in April we showed the WHY BEFORE THE WHAT AND WHEN. So you could see it coming. And when it did, what did we get? Weaponized reporting that apparently did not even understand what was going on to set this up and that set up a near record low year in the Pacific basin, home to 4x the ACE vs the Atlantic. SO if all this is a global problem why no mention of the much larger climate event implication, the largest basin for tropical cyclone activity only a bit over 50% of average!

And what about the tornadoes that were supposed to be devastating the nation after the vicious 2011 Season. Since then, most of the seasons have been below average, The thick red line is this year. My book, The Weaponization of Weather in the Phony Climate War, exposes exactly what you are seeing going on today. This is going to be ramped up. We have some heat going on now. If you are going to “ Vision Quest” it and run the stadium steps with a railroad tie on your back during midday ( It’s a wrestling movie and Madonna actually has a song in it I like).

(Was hard enough me running Beaver Stadium in the fall wrestling preseason with no railroad ties) yes, its dangerous. If you understand that its hot, you take it easy, like countless generations including those that suffered the horrendous heat and drought of the dustbowl with no air conditioning and no relief, then you understand this is simply the weather being the weather. But it is being weaponized, and its only going to get worse. We tell people the why before the what and when. The problem with people that are supposed to be standing for the truth on climate in our halls of power and even media outlets committed a bit more to letting the other side speak, is they do nothing well before hand and then when it happens, they are left to counter weaponized missives. With an indoctrinated public and media in the hysteria tank they have ceded the real battlefield (which is the strawman of climate hysteria). It is so bad, that it’s the FEAR of co2 we must rid ourselves of, whether it has much to do with it or not. That is on people who did not recognize what was actually going on. I wrote about that in the last blog. We have the ways to counter even that, and it won’t destroy our nation. IF YOU FEAR CO2, THERE IS A WAY OUT that won’t destroy the lifeline of the nation). But the best one can do is try to show the counters, because they are there, and to SHOW THE WHY BEFORE THE WHAT AND WHEN, to anyone with an open mind and open heart.

It gets hot in late Spring in the south. In fact, it can do it in mid spring in the northeast (Easter Sunday 1976!!). Weaponization of the swings that have always occurred and will always occur in nature is purposeful deception. Perspective must always be used. Is the planet warmer than it was? Yes, but past times this warm in the geological record are climate OPTIMUMS not Crisis or whatever the name du jour is now. But you will find there is just as much positive as negative if you look. If you don’t, then you can be swept up in a tide of deception with a purpose counter to what leads to a better life, more liberty and the pursuit of Happiness. That is where any “war” may lie, not with taming the climate.

Why the Internet Is Industrial Policy Not Free Market

The Paternalist Instincts of a Central Planner

Eating for a Living

Stop The Stall — It’s Time To Get Energetic About Energy