written by Joe Bastardi October 6, 2021
Joe Bastardi
Chief forecaster at WeatherBELL Analytics
Joe Bastardi is chief forecaster at WeatherBELL Analytics, a meteorological consulting firm. His reputation for making bold and accurate forecasts has landed him on major television programs including Fox News Live, ABC World News, The O’Reilly Factor, The Colbert Report, CBS’ The Early Show, Imus in the Morning, and several others. Additionally, Mr. Bastardi is well known for his blog featuring the popular videos “The Atmospheric Avenger” and “The Raging Weatherbull.”'
Latest posts by Joe Bastardi (see all)

1) The Biden administration’s energy policies are stifling our nations readiness for winter by stifling fossil fuel policies. SO THEY ARE CREATING A POTENTIAL PROBLEM. This is what they do, create the problem and then blame the other guy and use that to tear down the foundations of the nation.

2). The winter is likely to be cold especially over the heartland, Here is the Weatherbell.com forecast for Temperatures. 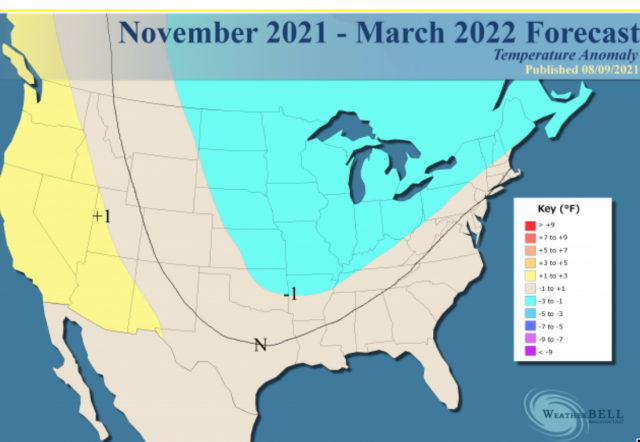 The heartland is of most concern,  We have been out with this forecast to our clients since early summer based on research we are doing on repetitive long-range patterns that hook the preceding spring and the hurricane season in close to the United states with the start of the following winter. Energy prices are starting to rise and will be MUCH HIGHER than last year.  You are already seeing this being alluded to.  But a cold winter and lack of supply, along with rising prices, force people to make a choice between heating their homes or spending money on rent, food, medicine, etc. We have already seen it start in Europe. God Forbid a truly cold winter actually shows up, To put this in perspective here is the November-March period last year. 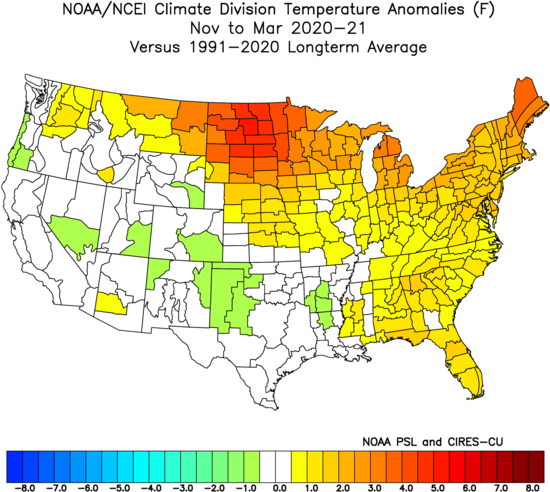 of course, during this time came the frigid February, but this was only one month, The nation caught a huge break with the warm November and March in the last winter. The fact is the 5 month period of most demand due to cold was overall, not that cold last year. 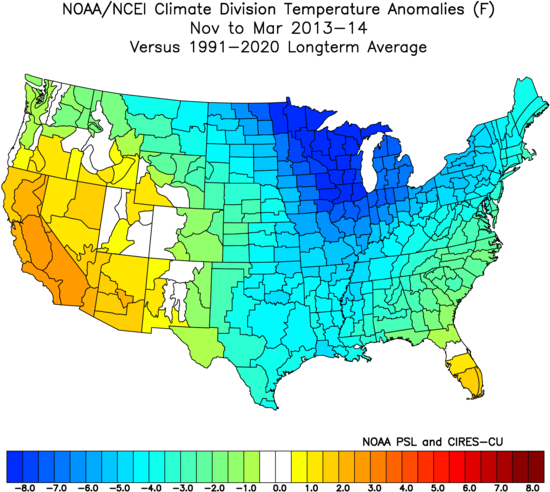 worse still something out of the late 70s   Demand is much higher now and Bidens policies are squeezing the fossil fuel industry.

The point is the stage is being set for this now. Remember we still had Trump policies last winter, We have had a year of policies designed to handcuff our nation’s energy lifeline.

So our forecast on its own merit would be a problem, Keep in mind that while over the long haul it may not be very cold ( there have been more severe winters), the increased demand and less supply would take their toll, not to mention the kind of 10-15 day super surges of cold that can cause extreme energy bottlenecks. While there are some samples in this pattern that were not cold, there were a few that if they occurred, would lead to disastrous consequences even beyond the implications of Biden Blackouts with this. Given the threat of cold in Europe, it would compound demand problems

The winter may be very fast out of the  gate  and while we all dream of a white Christmas, such a dream this year in a widespread fashion could be an energy nightmare

3) COLD KILLS MORE THAN HEAT.  COLD CAUSES MORE HARDSHIP THAN HEAT, COLD IS MORE EXPENSIVE THAN HEAT.  We saw a taste of this in Texas last year, where the lefts energy policies created a bottleneck where 20% of the energy was taken off the grid because of mandates that forced dependency on wind turbines that failed. And who did the left blame?  And they get away with it because we refuse to get out in front and take the high ground, Well that is what I am doing now,  It was the fault of the media, and people in our government that were more focused on what was a sham impeachment than what was the winter version of a cat 5 weather event that you could see coming,  So when it did, the left simply weaponized it and used it. But now imagine even less supply and widespread cold, The multiples are many. From resurgent sickness due to people being forced into shelters and having to turn their heat down ( shades of Jimmy Carter except for much more demand) to just the aspect of trying to get products to market, the recipe for disaster is there.

4) We must take the high ground here, Instead of waiting until it happens and going tit for tat in the blame game with the left, come out in advance, show the nation the potential problem targetting them, and then simply lay the trap for them when they try to claim otherwise.

Summary. The Biden policies will set up the situation for the left to once again Weaponize the Weather and blame fossil fuels for the misery that results.  Their practices are predatory and parasitic, for they prey on the fact people do not know what is going on or what the weather has done before and can do again, and their agenda involves taking more and more from the host ( the American people) with no giving back or benefit,

If Biden Blackouts come there should be no way anyone but the policies being pushed on our nation gets the blame.  But we must show beforehand what is at stake.

The Prospects for Economic Freedom

The FCC is Just Another Dishonest, Authoritarian Arm of the Obama Administration

How Many of the World’s 8 Billion Will Survive Without Fossil Fuels?