The Sandstorm: DEI Must DIE

Researchers extraordinaire Jay Greene and James Paul have released a series of three carefully crafted studies on Diversity, Equity, and Inclusion that detail many aspects of the harmful scheme. In a nutshell, the authors find DEI to be “counterproductive and politically radical.”

The part of the study that examines DEI’s effects on elementary schools is particularly damning. It looks at school districts with at least 15,000 students, of which there are 554, and finds that schools with Chief Diversity Officers (CDOs) “actually have larger gaps in achievement between black and white students, Hispanic and white students, and non-poor and poor students than districts without CDOs. And those gaps are growing wider over time. This pattern holds true even after controlling for a host of other observable characteristics of those districts.” 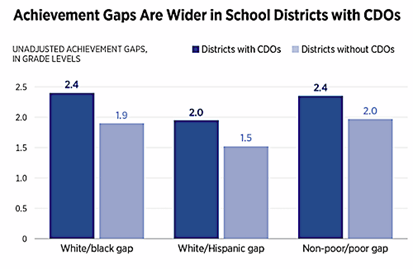 The authors explain that the gaps occur because CDOs “are more focused on promoting a political agenda than they are on finding effective educational interventions.” And that political agenda includes advancing policies that typically exacerbate achievement gaps, such as eliminating gifted programs and advanced math classes “while selecting English and Social Studies content for its political orthodoxy rather than educational quality.”

Why would such a bad idea be such an easy sell? Because when you dress up the words, they can sound good, at least to true believers. But in reality, it’s a nightmare for all concerned, except of course for the “progressive” elites who financially benefit from the racket.

One part of the study deals with the anti-Semitic nature of DEI. Interestingly, Greene and Paul compiled Twitter feeds of 741 DEI officials at 65 universities and find “605 tweets that bash Israel and just 28 that praise the Jewish state.” They add that 62% of the tweets that reference China were favorable.

When it comes to educational malfeasance, California, as usual, does its best to be the national leader. In fact, there are potholes galore on Equity Road in the Golden State. For starters State Superintendent of Public Instruction and Indoctrinator-in-Chief Tony Thurmond hired Daniel Lee as the state’s first “superintendent of equity.” But shortly thereafter, Politico revealed that Lee, a psychologist, life coach and self-help author, is also a Pennsylvanian, and was given a job that was never publicly posted by the California state Education Department. Apparently being buddies with Phony Tony was enough to land Lee the $180,000 a year job. When asked if others were interviewed for the job besides Lee, Thurmond replied, “I can’t recall.” If nothing else, Thurmond is living proof that cronyism is alive and well in California.

Then there was the open letter signed by 1,500 (and counting) mathematicians and scientists who have expressed great alarm at the looming “equitable” California Mathematics Framework (CMF) which will become reality sometime this year. According to the concerned scholars, the working version of the framework, among other things, aims to “reduce achievement gaps by limiting the availability of advanced mathematical courses to middle schoolers and beginning high schoolers.” The idea, you see, is to dumb down curricula so it becomes more equitable. Excellence, and striving for it, have become so very passé. The academics add, “…initiatives like the CMF propose drastic changes based on scant and inconclusive evidence. Subjecting the children of our largest state to such an experiment is the height of irresponsibility.”

Also from the Golden State, the formerly world-renowned University of California announced in November that it won’t require any admissions tests for undergraduate applicants. This comes just a little more than a year after it stopped requiring SAT and ACT scores. The reasoning is that the exams “discriminate against low-income students of color and people with disabilities.”

Left unsaid is that eliminating all tests actually guarantees unfairness, as college admissions officials get to decide which group they favor, and this of course is discriminatory. On that note, referring to Harvard’s “holistic” (read “subjective”) approach to admissions, Glenn Reynolds points out it will make the Ivy League school’s already extensive discrimination against Asians easier, and harder to prove. Reynolds adds, “The Ivy League did the same thing in the first half of the last century, when it was afraid it would be overrun by Jews. It started emphasizing ‘well-roundedness,’ ‘leadership,’ athletics and things that Jewish immigrants would find harder to satisfy. Now it’s doing it again.” California seems to be following Harvard’s M.O.

The Wall Street Journal’s Jason Riley notes that one of the major drawbacks of affirmative-action policies is, that in the name of helping some blacks, “they taint the accomplishments of all blacks. No one with any self-respect wants to be perceived as a token, whether in the workplace or on a college campus.”

In the real world, as diversity becomes king and quality is relegated to the ash heap, I would love to pose the following questions to any diversicrat:

The next time you are trying to find a surgeon, will you pick the one who was licensed because she was the right minority, or the one who earned her position the old-fashioned way? Now substitute auto mechanic and electrician for surgeon. How do you respond? And, do you want your favorite basketball team to be comprised of players of various ethnicities and genders, or the one that had the best damned players money could buy?

I can’t wait for your response.

[FIRST PUBLISHED AT: For Kids and Country].

The Sandstorm: Randi, Get A Grip!

Economics and the Pretense of Knowledge

The “Bootleggers and Baptists” of the Coronavirus Crisis